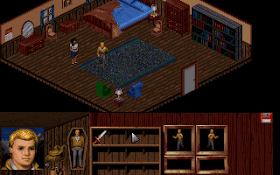 Genre: Action, Adventure
Perspective: Bird's-eye view
Visual: 2D scrolling, Isometric
Gameplay: Puzzle elements
Narrative: Horror
Published by: Strategic Simulations
Developed by: Event Horizon Software
Released: 1993
Platform: DOS
Curtain - role-playing game, in it you are talking, fighting, get and find a common and magical items. The game executed in perspective (top view and side view) of the projection, with small characters figures. All businesses, despite the small size, painted a very accurate and detailed. Especially nice to see, with some plausibility decorated home, picked up and the characters depicted. The action takes place in Romania, in a valley surrounded by the Carpathian Mountains. Time comes to a standstill in this valley, people, cut off from the outside world and live in the old way, without using or knowing about the progress achievements. The right place cairn, a very old and powerful vampire. It serves numerous representatives of the dark forces. Cairn set their own rules in the valley, and the people, frightened and unable to withstand the impact of a vampire, is dying out. You act as a seasoned pilot who falls into the valley from the outside. Very soon you will realize that you do not leave this doomed place, while above it is ruled by the forces of darkness. Moreover, hospitable host shows you an ancient manuscript, which clearly says that fate is predetermined for you to rid this place of damnation.
Most simply run the game using the mouse. In this case, you almost do not need a keyboard, and you can easily perform all the necessary actions to you.
Pay attention to what you are at any point in the game can be put forward as the statistics screen, while retaining the ability to walk at the same time. Move the cursor to the edge of the screen, and it will take the shape of a double arrow. Now press the left button and, without releasing it, move the mouse up. The screen to make it stretch. You will be able to push it back into place similarly.

In the upper right corner of the portrait, whether by character or, for example, poisoned,
. (Greenish complexion) or weakened (swelling under the eyes).
A little more to the right shows a hiking bag.
As the filling of various objects (mainly affects the weight, rather than size) is changed, becoming more fulfilled.
To the right of the bag has a small figure of the hero, lying in a coffin. With the application you wound figure takes the form of the skeleton (bottom-up). In this peculiar instrument you can easily find out how you feel.
Bottom left shows a large, our hero. Ba can attach it to the right or left hand weapon or object, or put on his amulet.
Closer to the center there is the contents of your bag, the expansion on the shelves. Note that in a field bag can be bags, boxes, etc., in order to identify the contents must be placed in their left hand.
Nearby there is a frame in which information is given about diseases. In it are pictures depicting the ailment. For example, a picture with the image of an old man with a cane shows that you are relaxed during the battle with the energy vampires, and need treatment. This you can see by looking at the portrait.
Below is information about the subject. Indicate you are interested in the subject of the cursor (it should be on the shelf), and click the left button. You will see the details and a picture of the subject.
Above are also two symmetrical windows that symbolize the action of the right and left hand. First of all it is - a blow. Put a weapon in either or both hands in advance. In battle after the attack with one hand it takes some time to recuperate before the next blow.
Below are two similar windows smaller. They are used for throwing, or throwing objects.
In the upper right corner of the displayed icon of a floppy disk. Pointing to it, you can activate the game menu.

During the movement of the cursor takes the form of various arrows showing direction. When you hover the cursor on the person it changes form, and clicking the left mouse button, you will be able to talk to him.
In order to open the door, just go as if it does not, at the right time a character opens it himself.
To move a heavy object (cabinet, carcass, etc.) stand next to him and go, so that the subject was on the line of motion.
In order to take an object, you can point to it and press the right arrow key. In this case, the subject will fall for the next free compartment shelves.
It is also advisable to take a subject by pressing the left button, and then specify a location on a shelf or in a pouch on which you want to place it.

During a conversation with people, some keywords are highlighted in a different color, emphasized the. You can choose any of the keywords in order to talk to the relevant topic. If you simply click on the text box, then to the end of the conversation you will be shown a list of keywords from which you can again select you are interested. In addition to talk to nekotorye'temy, you will need to enter certain words. For example, to take the coins from Ivan, you need to enter the word COINS during a call. In order to complete the dialog, you can either enter a word a BYE, or simply press the right mouse button.

- Inspect the labyrinths and catacombs as fully as possible, in them you can find many useful items and money.
- You will be treated in a gypsy for free.
- Many of the monsters are not killed with conventional weapons.