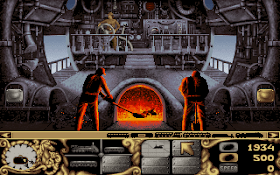 Genre: Action, Strategy / tactics
Perspective: 1st-person, Side view, Top-down
Pacing: Real-time
Vehicular: Train
Setting: Post-apocalyptic, Sci-fi / futuristic, Steampunk
Published by: Silmarils
Developed by: Silmarils
Released: 1993
Platform: DOS
Unusual representative of post-apocalyptic genre simulator commander trains, with elements of Pirates!, Planet's Edge and Red Storm Rising.
End of the World has come ... But not in the form of a nuclear war, but in the form of the next Ice Age. The self-proclaimed Arctic Baron cuts across the icy wilderness, once the former Europe on his armored train, gathering under the banners of soldiers, engineers and slaves (and even mammoths) and the non-stop fighting for his life ... 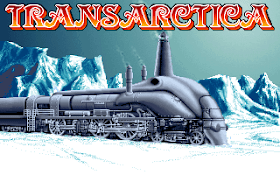 The essence of the game are as follows: we command train. We need to move back and forth across the map by trading with the surviving settlements, fighting with enemy trains and capturing additional resources necessary for our survival (in the first place - coal for the locomotive, the second - weapons and food).
The train can be changed at any station - to purchase a couple of missing wagons (eg wagon for transportation of animals - that was where to put the mammoths), for example, or sell unwanted. Team coaches allow us to repair sabotaged bespoezdnymi nomadic ways to manage spies embedded us in certain cities, and simply monitor the condition of the train.
Still, in the best tradition of Fallout, we may encounter random encounters - from the broken rail (which should fix it ... and on the way due to dune - that is, because of the ice and get out evil nomads storm train) and herds of mammoths ( they can and should carry with you - in the battle train-on-train them no price) and up to an ambush in the tunnels (log - in the way of people - the assault team coach). Battles take place in a certain similarity SidMeyrskih Pirates! - We need to coordinate the actions of our people, trying not to let the enemies have used dynamite to damage of ...