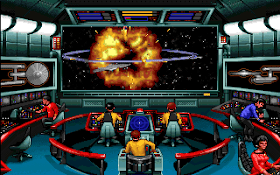 Genre: Adventure, Simulation
Perspective: 3rd-person
Gameplay: Puzzle elements
Vehicular: Space flight
Setting: Sci-fi / futuristic
Published by: Interplay Productions
Developed by: Interplay Productions
Released: 1993
Platform: DOS
Continuation of Star Trek: 25th Anniversary on the same engine, with a slightly modified approach to everything.
This time all the episodes of the game - and it is still divided into the "series" of the series - will throw our heroes not only in space, but also in time, which cannot but. Nobody wants to take a trip to World War I? Exactly. 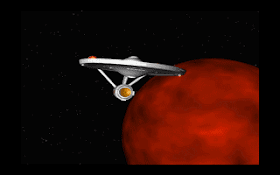 In addition, the list of innovations includes the opuque size of the diskette version of the game, the ability to completely abandon the scenes of battles between starships (because of which very many, including myself, did not see the endings of the last part) and the charming vastness of reference materials in the Enterprise's on-board computer (for technical reasons, available only in the diskette version - a rare case when it turns out to be more meaningful than the CD version).
The CD version, as always, is equipped with the voice acting of all the characters by the performers of the corresponding roles from the series and because of this it is more attractive for certain categories of citizens. Plus, some of the screensavers with the participation of the Enterprise (for example, the transition to superluminal speed or entering orbit) are no longer rendered by the flight engine, but are made in the form of video clips. That, in fact, winds up the volume of the game.
Anyway, boldly go where no man has gone before and all that. Warp Nine, engage!
‹
›
Home
View web version