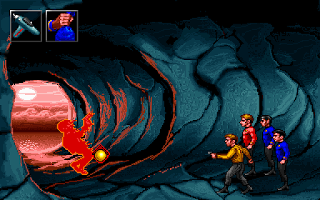 Genre: Adventure, Simulation
Perspective: 3rd-person
Gameplay: Puzzle elements
Vehicular: Space flightl
Setting: Sci-fi / futuristic
Published by: Interplay Productions
Developed by: Interplay Productions
Released: 1992
Platform: DOS
The game is framed as a continuation of the series - or rather, a fragment (plot - just after the last episode of the series, but before the first full-length film based on it). It is divided into several independent chapters, each of which is a separate "series" - with its own name, plot, set of tasks, locations, NPCs and items. The series are tied to each other only by the ship and the characters - as in the series.
Each chapter begins with our receipt of a combat mission from the Starfleet. Having received the control center and having checked the map in the manual (do not be afraid, it is attached to the game in PDF format, thanks to the scrupulousness of the Underdogs), we find the location of our target and spry it on the third superluminal one. We arrive, extinguish all enemies in space simulator mode, enter the orbit of the planet, teleport to the surface ...
The quest process itself to a pain in the livers at the same time resembles the series itself - and games from LucasArts. The interface is exactly the same as that used in their greats Full Throttle (released two years after this game) and Curse of Monkey Island (released three years later), so it should not cause problems for anyone. We operate primarily the captain of the Enterprise, James T. Kirk (the guy in the yellow shirt, if you haven't figured it out yet), and on the surface of the planets he is always accompanied by the ship's chief officer, Mr. Spock (in blue, the one with the pointed ears), the flight doctor, Mr. McCoy nicknamed "Bones" (also in blue, but with a keen sense of humor) and a randomly selected member of the ship's security service (in a red shirt, a consumable item - only his death on a mission will not be a failure).
Otherwise, everything is standard - we walk, talk, solve ... However, the game is distinguished by two features - a frantic number of alternative solutions that allow you to approach the solution of the problem as you like (well, almost); and an assessment of our adequacy to common sense and ethics at the end of each chapter (as a percentage - obviously, the closer to 100%, the better). You will shoot at everyone without talking - get less than 10%, you will solve all issues quietly and peacefully - get bonus points that greatly simplify life in the simulator mode.
The simulator part is executed without any special frills - Kirk sits on the captain's bridge of the ship, giving orders ("Raise power shields!"; "Prepare photon torpedoes!"; "Fire!") And admiring the results of his activities. Only the last chapter presents a real problem, where you must simultaneously cope with a squadron of pirate ships and the sinister clone of the Enterprise leading over them ...
Summary. The game will appeal to all fans of the series (if it is not yet clear, I am also one of them), all lovers of good quests and simply connoisseurs of complex work on animating sprites - the little people on the screen move almost like real ones.
N.B. Seedversion differs from floppy by the presence of voice acting. Total. Firstly, each location is now equipped with a very lively set of ambient sounds that interfere with our listening to music and enhance the atmosphere. Secondly, now all the lines of all characters have been voiced, while the Enterprise's crew is voiced entirely by the actors of the series.
‹
›
Home
View web version