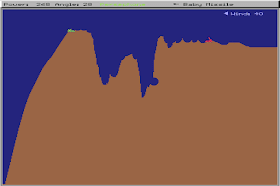 Genre: Strategy / tactics
Perspective: Side view
Visual: 2D scrolling
Pacing: Real-time, Turn-based
Gameplay: Artillery
Published by: Wendell Hicken
Developed by: Wendell Hicken
Released: 1991
Platform: DOS
Before you - one of the first simulators of tank duel battles, a game based on the principles later implemented in the more famous Worms and Pocket Tanks. The idea is simple to the point of genius - to destroy the enemy's combat vehicle, while maintaining your own. Such an uncomplicated wording, however, hides great gameplay behind it.
At the beginning of the game, you are given a certain amount of money that can (and should) be spent before the actual battle in a special weapons store. You won't be able to buy much with the starting capital, but each subsequent victory will bring you more and more dollars. The assortment of the store is very rich - here you can find a wide variety of weapons, from simple light shells (which are named accordingly - Baby Missile), to a powerful cannon that blows all objects on the screen to pieces. In addition to the means of destruction, the authors of the game presented us with additional devices - in order to increase the chances of winning, it is worth considering buying an energy shield and fuel, which allows us to somehow maneuver. You also need to strike wisely - before each shot, you need to adjust the angle of the cannon and set the power, which determines how far your projectile will fly. Scorched Earth has destructible terrain, and it is much easier to sometimes hit the terrain next to an enemy tank to make it crash by falling from a height than trying to break through the protective field.
There are several game modes - both turn-based combat and real-time combat are possible. In addition, it is allowed to fight simultaneously with 7 opponents, in the role of which both your friends and the computer can act. The level of play of the latter, by the way, is easily customizable, and at the highest difficulty you will have to work hard to achieve victory.
‹
›
Home
View web version