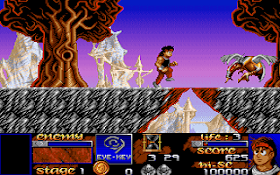 Genre: Action
Perspective: Side view
Gameplay: Arcade, Platform
Published by: Electronic Arts
Developed by: Dinamic Software, Zeus Software
Released: 1992
Platform: DOS
Perhaps the most important advantage of the game - is its graphics. Everything - from the background to the small objects - loomed very clear and beautiful, well-chosen color palette used dimming and brightening, screen scrolling is carried out smoothly, without jerks. The creators probably squeezed everything possible from the VGA card.
Unlike graphics sound in the game is poor. Although the setting and featured Roland and Sound Blaster Pro, all that one can hear it loud and poor quality Adlib music. For those who are satisfied with the speaker, this problem is not relevant.
From the technical aspects of the move to the game itself. 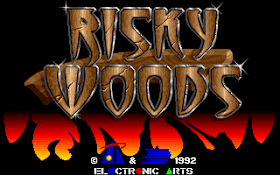 The game principle is simple: to break all the bad guys, to release all the good guys, to take all the things that will help you to do this. You control a hero who in search of adventure thrown into dense forest, inhabited by monsters - strong and not very much. And once that happened, then why not take a couple of exploits and does not rid the world of a great evil monster, rightly earning with glory and honor.
Despite such a simple alignment, in practice a little harder. Immediately I say, that you need a lot of time before you will know the taste of victory.
Enemies are numerous and appear constantly on the road are common traps, but, perhaps, the main trouble - you have limited time. That is, in this game there is no time to think, we must act and we must act quickly.

What to do in the game?

At each level, there are stone idols, they locked up the good spirits of the forest. Hence their release - is your duty. You can do this simply by breaking the statue. However, the path to some stone statues closed-guard. In order to remove the stone from the path, you need to collect two key halves in the shape of the eye. Once you have found the two halves, and stood beside the stone, flip a switch (touch Bras + down arrow), and the barrier will fall. Beware of fake statues, breaking that, you lose health. To distinguish their seemingly impossible, even in principle, their location provides. If the statues are a little too close, just to get to them and the inner voice says, "Something's fishy," perhaps worth considering, and move on. While the surest way - a way of trial and error.
If you go to the stone-guard without the full key, then it will bring you back closer to the top, and you have to look for the missing half.

What helps in the game and what harm?

At levels come across a variety of subjects. And unlike many such games, some things are harmful. All items disappear quickly, so you need to grab them quickly (but carefully).
One of the most important lessons, in addition to the destruction of moving opponents, is picking up coins. Coins are needed at the end of the level to buy new weapons in the store. The main source of the coins are winged bags, of which poured the coins if they shoot. Killed monsters also generate revenue.
In addition there are also bags chests. The chests are generally kept a lot of all sorts of things. To open the chest, you need to shoot him.
Additionally, you can find:
The rest of the items, if it is useful, it is insignificant, as a rule give a bonus of 10,000.

How to deal with the enemy?

The closer to the target amount and the strength increase of monsters. Universal way to deal with all the enemies - the rapid movement. It makes no sense to stand and shoot, because all the time there are new villains. But do not forget to pick up coins on the way to buy weapons as knives you definitely do not pass the more complex stages. Among the new weapons a good choice - a battle ax. Note the striking power of weapons. If you once again buy the same weapons, the strength of its increase to 2 and so on.
At the end of each level you have to fight with supermonstrom. The most effective fire while retreating. When the space for the retreat is over, quickly push the monster back. Repeating this maneuver, you can win the battle with minimal losses.
‹
›
Home
View web version