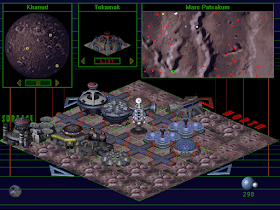 Genre: Strategy / tactics
Perspective: Bird's-eye view
Visual: Isometric
Pacing: Real-time
Setting: Sci-fi / futuristic
Published by: Sierra On-Line
Developed by: Sierra On-Line
Released: 1994
Platform: Windows 3.x (Win3.x)
Are you interested in astronautics news? Are you reading the description of the next ISS module? Do you love science fiction about colonizing other planets? Are you sad that no permanent base project on Mars has yet been implemented? Then this is the game for you. First of all, what is Outpost? Roughly speaking, this is a sci-fi version of SimCity; the same residence, commerce, industry, utilities, only in the realities of a distant lifeless planet. The plot is simple: in the near future, astronomers have discovered that a huge asteroid Vulcan's hammer is moving towards Earth. All attempts to knock it off course or destroy it ended in nothing (except for the fact that the asteroid split into two parts, which follow the same course), but the Earthlings have a plan B! A super-high-speed interplanetary ship was prepared in advance, with the help of which a handful of "lucky ones" will fly to a distant star called ... and here the game begins. 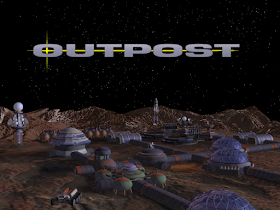 Before us is a map of the stars closest to the Sun. We send ultra-long-range probes to the ones we like, in order to find out the probability of the presence of a planetary system. Have you chosen the stars? Now if you please choose what to take with you. How many colonists, how much food, what satellites, what terrestrial mods ... what? How long is the "unit of food" enough? Why do you need a geological penetrator? How many Tokamak thermonuclear reactors to take? Read the manual, citizens (fortunately, this is attached to the game). But now we spent all the credits, met the draconian restrictions on the mass of junk, press the buttons, watch beautiful (even now!) Videos. We arrive ... an artificial idiot with a cute female voice informs that the star has no planets, and we are doomed to slow death in space. What is the problem? And the fact that Barnard's Star is, of course, a beautiful name, but this red dwarf of spectral type M5V, to put it mildly, is not suitable for colonization. Hardcore? Hardcore. It is immediately clear that a former NASA specialist had a hand in the project (more on that below). However, for those new to the game, this moment is scheduled step by step. What to take? Where to fly? What to do in the first turns (turn-based game) on the surface of the planet? There are many worlds available for colonization, the conditions of which are written off from the planets and moons of the solar system. If you wish, you can build even on the surface of a large asteroid (however, the conditions for survival will be appropriate). Then there will be a landing, long-term clearing of the territory, rebuilding infrastructure, mining (the main resource in the game), providing the colonists with food, a desperate attempt to survive the first surge in mortality, a constant drop in morale. Ahead are residential underground complexes, the development of science, the space program, terraforming and so on. There are a lot of difficulties. Difficulty levels above "Beginner" will not forgive mistakes. Stumble on the 40th move - on the 300th it will come back to haunt, and how!
The scientific component of the game deserves special attention. Outpost's lead developer and project manager was Bruce Balfort, a former scientist at NASA's Ames Research Center. The project was also favored by NASA itself - this is evidenced by the fact that the game uses real recordings of the astronauts' negotiations with the Control Center (for example, when an interstellar spacecraft is launched, negotiations with the Mercury spacecraft (Freedoom-7) sound during its seventh flight, and when landing on the planet - a record from the famous first Apollo mission to the moon). The hand of a real scientist is felt in everything: in terminology, in reference information to objects; even SciFi is peculiar here: instead of ion beams, cyborgs and death stars, we are offered less illusory and closer to modern realities thermonuclear fusion, cryostasis and (not by nightfall) nanotechnology. All this cannot but please the person who is seriously interested in astronomy and cosmonautics.
What pleases? I am pleased with the beautiful design, with love and thoroughness traced models, animation and video inserts. The first rebuilt underground entertainment area with parks, the well-established production of robots, a scientific discovery that allows the construction of new buildings is a genuine pleasure. Realism pleases: it is believed that survival is difficult for your colonists.
What's annoying? Annoying interface is annoying. Lots of small windows, lack of scaling and scrolling (this is one of the first games for Windows, many of the interface details we are used to have not yet been mastered). Annoying lack of information. How soon will the mine run out? How many moves will a hole dig to the bottom level of the robotic digger? What spectral class of the star is right for us? All this will have to be figured out on your own. A bunch of various bugs with departures are also available.
Summary: Outpost is an extraordinary, ambitious project with not very convenient implementation. Recommended for fans of a leisurely game and fans of astronautics.