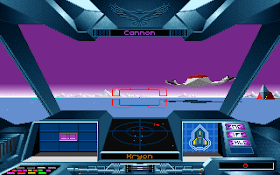 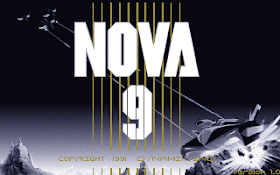 Then you will certainly remember that the fate of terrestrial civilization has decided to use the earth's masterpiece of technology, ground combat vehicle "The Raven." Supertank like a knife through butter, passed through several star systems and crushed newcomers led by Draksonom. At the beginning of "Nova - 9" it turns out that Drakxon alive and he did not leave the ambitious thoughts about the capture of the Earth. On the distant planet, he has built a new fleet of invasion and is preparing for a new campaign. It looks like you'll have to join the battle again.
In general, "Nova - 9" refers to the category of arcade games, not imitators. supertank control is simplified to the limit, in fact it comes down only to the movements and shooting. Images enemies synthesized from polyhedra and somewhat arbitrary, but this is achieved by a solid gain in speed. The arrow keys move the tank and allow to make turns around an axis, and the Space key is used to apply the selected weapon.
List of weapons does not remain constant; successfully collecting power modules at the levels, you can get new weapons and equipment. To use a special weapon or equipment, press the Enter key and the arrow keys to select the symbol weapons.