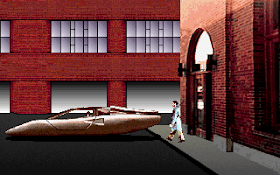 Genre: Adventure
Perspective: Side view
Gameplay: Puzzle elements
Setting: Sci-fi / futuristic
Narrative: Detective / mystery
Published by: Access Software
Developed by: Access Software
Released: 1989
Platform: DOS
"So you are the same Tex Murphy?"
"In the flesh," - I replied. - "Miss ...?"
"Linsky, Sylvia Linsky." The girl's face suddenly ran like a shadow.
"My father ... I want you to investigate his death."
Since about such a dialogue starts the game Mean Streets, provided of course that you like any respectable detective begin acquaintance with the game by reading the manual. Yes, the plot of the game is presented in the form of his short stories - no you prerenderennyh savers, or, God forbid, rollers on the game engine. 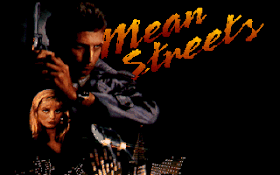 So you've downloaded the game, it successfully launched, and you can not wait to start an investigation. Where do you start? For a start look around: you're in your car, but not simple, and flying (and, apparently, damn similar to De Lorean from the movie "Back to the Future") - it is called speeder. Moving between locations is done either manually (but guided in this mess of green pixels, in my opinion, it is impossible), or by using the autopilot. For this it is necessary to drive a Navigator (hotkey N) coordinates of the destination and engage the autopilot (press A). Generally speaking, all the gameplay is built on finding new coordinates. The first one you will find in the manual - this is such a kind of copy protection, and in the future will have to get to know them as we talk, fights, shootings and searches - a typical job for a private investigator.
Dialogues are built on the principle of "enter the word to move through the story." Basically the names and corporate names. The most important thing to keep in mind, getting into the Mean Streets, - in the game there is no magazine that was conducted to record all of your conversations and information received. The results of your investigation you have to write for yourself or rely on your memory. I personally played with a notebook, writing down all the names, coordinates, and important, in my view, the details - believe me, it helps a lot.
But if you do happen to forget any address or simply do not know what to do - you can always count on the services of your secretary and the informant, who, incidentally, are the only animated and voiced characters in the game. The difference between them lies only in the amount of information available to them and their price. Secretary Tex give us any information for free (well, not for free, pay-it certainly gets time), and with the informant at times and will have to haggle.
And finally mention a couple more mini-games. The first of them - "Search the room": the management here is quite trivial, I recommend to read the manual, or at least cause a certificate of managing keys F1, and the second - "Protect yourself": here the idea is to get to the right edge of the screen, spending less ammo . You can crouch, shoot and move left / right.
Here's a gaming hybrid in the tradition of Sid Meier, but not by Sid Meier. Who is this worth playing? First of all, fans of Sid Meier's Covert Action. But in general - should please all fans of detective stories.
‹
›
Home
View web version