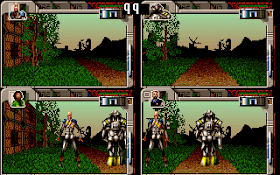 Genre: Action, Role-Playing (RPG)
Perspective: 1st-person
Interface: Multiple units/characters control
Setting: Sci-fi / futuristic
Published by: Psygnosis Limited
Developed by: DMA Design Limited
Released: 1993
Platform: DOS
The action takes place in about 3000 year. You play a team of mercenaries on a mission to the abandoned corners of the universe. You have to go through many trials: fight with hostile alien creatures and robotic guards to pass numerous traps, using logic and intuition, find secret passages to find the keys and magnetic cards, and eventually reach the evacuation zone.
The game is divided into three sections: a scrimmage game, the performance of the chosen one mission and role-playing game (RPG), ie implementation of a set of missions. It is important to note that during the role-play as you progress through the episodes (missions) team members gain experience, expressed in points, which is reflected in the accuracy of shooting and ability to survive in wounds. 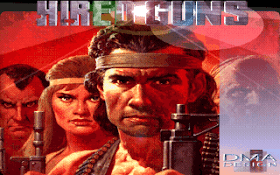 Also important is the number of players. If you play one or two people, you control a team of four mercenaries. If three people play, the team will be, respectively, consist of three mercenaries. Maximum number of players and mercenaries - four. If you play one, you might be tempted to shoot the rest of the mercenaries, pick up their weapons and play one character. Do not do it, for the passage of certain missions must be at least two participants.
The display shows three or four windows, which shows a view "from the eyes" of each participant. You control one of them or all of mercenaries in real time, ie, at any given time, regardless of whether you're standing, move, look at a map or choose a weapon, there is a continuous movement (or lack of movement) of objects, computer-controlled, or your buddy.

Basic principles of the game

First you choose the game characters. They already have some weapons and a variety of subjects.
Move in the game takes place in steps, turns possible only at 90 degrees.
When shooting, you can hit the target, located on the same imaginary line with you (this rule does not apply to such weapons and grenade launchers). You will not be able to hit the targets which are above or below you, and targets which are behind the columns, force fields or other objects (even if you see them).
You can do harm as hostile purposes, and the members of his team. Be careful when using mines, grenades and automatic watchmen.
In the fall of more than one level, you lose health points.
You can carry a limited number of things, capacity varies depending on the character selection. So do not rush to take everything that lies beneath their feet.
only one subject or one character can be placed in the same field. Therefore, you will not go away in narrow corridors or put two things on one field. The only exception is the case when the mercenary is killed. Then on the field in which he was killed, are all the things he was carrying.
In underwater levels, you can die from lack of air, if you are not a robot. Also, you can poison certain types of alien fauna.

Rules only for role-playing

The player, who was killed during a mission, not be able to continue playing in the next. Only surviving players will go on. Perhaps you should replay the mission again.
The mission is considered complete when all players are in the evacuation zone.

To control the characters you can choose the device following items:
Joystick 1, 2 Joystick, Mouse, Keyboard 1, Keyboard 2, Keyboard 3. Mouse control.
Watch for changes in the cursor. Depending on the location of the cursor changes shape, the arrows correspond to the directions of motion, square cursor means that no action is cross fire. By pressing the right mouse button, you reload a weapon.
When throwing grenades cursor takes the form of a circular chart, completely filled circle means maximum throwing distance.

To manage each player you need five keys. Let's call them to the right, left, up, down, shooting.
For reloading weapons press the shooting together with a key down.
For the shot, press the fire button in conjunction with the up. To move on the characteristics of the player shooting press the key together with the keys left and right. Movement forward, backward, turning to the right, to the left, respectively, are carried out by pressing up, down, left, right.
The following table shows the specific key combinations for different choices.
KEYBOARD 1: shooting - the Space, up - of q, down - and, to the right - P, the left - on.
KEYBOARD 2: shooting - Ins, * up arrow up, down - down arrow to the right - -, left - PgUp.
KEYBOARD 3: shooting - Right-Ctrl, up - 8, down - 2, right - 4, left - 6. The keyboard can not simultaneously play more than two people.

Recharging is done by simultaneously pressing buttons and moving the handle joystick down. For the shot, press and hold the button and move the joystick lever. Movement forward, backward, left, right, implemented by the respective joystick movements. Move through the menu by holding down and moving the knob to the right and to the left.

DISRUPTOR CANNON. This is the most powerful handheld weapons available. Despite the fact that very low rate caused enormous damage.
NAOMI GRENADE LAUNCHER. The most recent and perhaps ,, latest development Naomi Inst. Model description, given by "choo hondiss sukka ': use. 40mm burst grenades
RPG F ROCKET LAUNCHER. North-European F - series of grenade rocket carrier. Considered the best budget model for three consecutive years.
NEUTRON-FLUX LASER CANNON. Prednazanachen for use in a vacuum, in the atmosphere is less efficient. The model has been awarded the Prince of Wales for innovation and design. Requires KDzhoul charge 1 or more.
PARTICLE BEAM RIFLE. The rifle is based on the phenomenon of energy transitions in the ultraviolet spectrum. The result is very devastating. Requires KDzhoul charge 1 or more.
MOUNTED MACHINE GUN. It comes in a collapsible form to set the 70-mm deviation recommended for the near support and machine-induced protection.
MOUNTED MINI GUN. This weapon is classified as a military and therefore not available for use by civilians. It uses cartridges 0.44
SMALL ARMS IMPERIAL AUTO. Because of the terrible noise and problems with recharging of this model is attractive only for enthusiasts and collectors. It uses a 9-mm cartridges
SMALL ARMS 6 SILENT AUTO. SMG average weight. Supplied with a removable silencer and extended clip. It uses a 9-mm cartridges
OXY 6 Flamer. The security device from the reflection of fire, and the range of the jet of burning oxygen guarantees personal safety.
OXY 6 FLAMER JUNIOR. This hand flamer shoots ampoule with fuel consisting of a special mixture of chemicals.
HYD-FLUORIN HAND LASER. The first generation of optical weapons with low birth weight. Patented by Naomi in 2711 need to be charged 1 KDzhoul and more.
M73 AUTO-GUN. It has a variable rate. Good general purpose weapon. It uses a 44-caliber ammunition
SNIPER RIFLE. Bad substitute rifle SMALL ARMS 6 and similar in range of fire. Improperly designed speed of a bullet to the muzzle. It uses a 9-mm cartridges
SHOTGUN. The low rate of fire, but potentially high damage. You do not need an accurate aiming. Uses 18 gauge cartridges
TUNGSTEN BORE RIFLE. By firing range close to pistols and sporting rifles. Usually sold in a set with a gun. Uses 18 gauge cartridges
TUNGSTEN BORE HANDGUN. By firing range close to sporting rifles. Usually sold in a set with the same rifle. Uses 18 gauge cartridges
NAOMI IV ASSAULT RIFLE. The product of company Naomi Institutes, a rival of the legendary M73. This special model has a laser sight, and recharges quickly. It uses a 9-mm cartridges
CMF STUNNER. It creates a magnetic field with high energy. Destroys aim at the molecular level. Requires KDzhoul charge 1 or more.
SONIC STUNNER. He works at microwave frequencies. Designed for off-balancing systems and destruction of the human body. Requires KDzhoul charge 1 or more.
SMITH & WESSON N29. high quality gun. The original copy is imported only from Earth.
(SILENCED) SUPERCOVERT. Favorite Weapon organizations in the fight against terrorism, for his guidance and clip vnutrismennyh CPU Usage * 9 mm cartridges
UPBI ISSUE 38. The regular members of the weapon Bureau of Investigation of the United Planets. Bizarre trigger may break. App. 0.38 ammunition.

It did not want to give specific instructions to the passage of the episodes, but to save your time, the author decided to bring the network exit plan teleporters. Let me explain, at Unleashed brings you into the hallway, where there are several teleporters.
Entering one of them, you find yourself in a square room, on either side of which there is a teleporter. Each of the four leads teleporters in the same room. If you have composed the movement scheme, then you're stuck for a long time.
The following is an exact plan, which allows to find the key and get out of the room.
From the first room - enter the eastern teleport (see directions on the compass.), Take the key. Next: South, East, North,
West, East, South, North, South. You went back into the corridor.
‹
›
Home
View web version