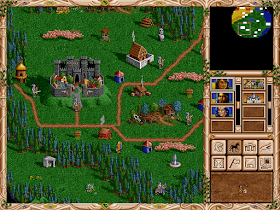 Genre: Strategy / tactics
Perspective: Bird's-eye view
Visual: 2D scrolling
Pacing: Turn-based
Gameplay: RPG elements, Turn-based strategy
Interface: Multiple units/characters control
Setting: Fantasy
Published by: 3DO Company
Developed by: New World Computing
Released: 1996
Platforms: DOS, Game Boy Color (GBC)
A year after the release of HoMM, 3DO managed to drive the world community crazy. Masterpieces HoMM II: The Succession Wars not only repeated the success of the first part of the game, winning the title of "Strategy of the Year", but also managed to master the wide masses of gaming minds. Released a year later, HoMM II: The Price of Loyalty, created by NWC in conjunction with Cyberlore Studios (the future authors of the great Majesty), only strengthened the position of a great game. 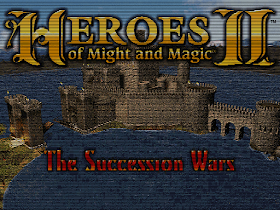 The new storyline provided by the NWC Wizards is great. The legendary Lord Ironfist, under whose leadership we managed to glorify Erathia throughout Enroth in the last series of the game, has died. But the kingdom will not remain without a ruler, since the Lord had two sons: the good Roland and the treacherous Archibald. According to the ancient tradition, the soothsayer will indicate the new king. But the sorcerer, by a strange coincidence, drowns on his way to the capital of the kingdom. His successor quite accidentally falls out of the highest window of the highest tower of the castle, the deputy successor just by an incredible coincidence found himself next to the dragon, when he, flying by, decided to yawn in his direction, well, and the fourth soothsayer was poisoned. Not otherwise, as the wine was expired ... Quick Archibald immediately announced that Roland was trying to disrupt the appointment of him, Archibald, king, and outlawed him. He was forced to flee the capital under cover of night, seeking refuge in his lands. But the next day, an absolutely independent soothsayer declared Archibald the ruler of Enroth. It is clear that the forces of good thirst for revenge, and Roland gathers his loyal vassals and declares war on his brother and those lords who have sworn allegiance to the villain.
There are more objects on the global map, and an add-on has added to their number various buildings for hiring high-level monsters or increasing the characteristics of heroes (the so-called "schools"). The cards themselves have also changed, now they are from 25 to 400% of the size of the standard card of the first Heroes, which will significantly affect the duration of our wanderings.
Especially worth noting is the excellent sound range. During our journey, we are surrounded by sounds whose relevance is beyond doubt. And for the stunning choral compositions that sound when the castle window is turned on, it makes sense to thank the composers. This is one of the first games in the history of computer games, whose music did not leave anyone who heard it indifferent. Animated videos are also very high quality and beautiful. In general, the whole game directly emanates fabulousness, mystery and beauty, even now.
Great game balance, amazing music, polished gameplay over the years, a high-quality storyline, hordes of enemies, unexpected allies and great artifacts - what else do fans of high-quality strategies need?
‹
›
Home
View web version