Fury of the Furries (DOS) 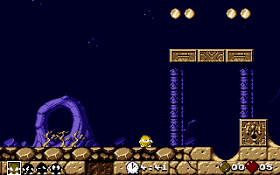 Genre: Action
Perspective: Side view
Visual: 2D scrolling
Gameplay: Arcade, Platform, Puzzle elements
Setting: Fantasy
Published by: Mindscape
Developed by: Atreid Concept SA
Released: 1994
Platform: DOS
Furries, the inhabitants of one of the lost planets in space - a strange folk. Externally pussy looks like a fur ball with eyes that look out from somewhere in the wild vegetation, with small hands and feet. Every pussy itself does not know how much, but it can take the form of other pussies and thus do what they can do. Life on the planet Fluffy was quite happy and idyllic until, until out of space on the planet sat down alien space craft.
Infamous space pirate who was driving the vehicle, kidnapped the leader Fuzzies. Even the most gentle creature, if it bring to rabies is dangerous and capable of anything. Unfortunately, to go all together it was impossible - too much, and the leader of the rescue otpraylsya one, the most dexterous and savvy pussy. In the game "Fury of the Furries" it is necessary to overcome the jungle, desert, teeming with predatory fish lagoon and many other equally dangerous places, to eventually get to their destination. Planet Fluffy pretty wild, so in the way of the brave lie in wait for a variety of dangers - spot predatory fauna and all sorts of traps. The difficulty levels of the game does not remain constant; more and more difficult to account for Fuzzies, and it's not just the speed of reaction 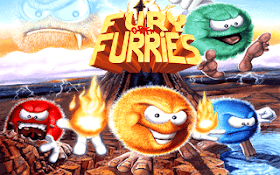 - You have to thoroughly stir the brains to see through the "highlight" level. At each level, the task remains the same game; pussy must reach the exit to the next level, "EXIT" indicator with the words.
At the levels you can sometimes find the prizes that will help Fluffy to his task. The most common coins (if you collect a lot of them, you are waiting for additional prizes Fluffy), but sometimes there are also some more valuable things, for example, watches, giving more time to pass the level, or even the whole "life" - mugs with "lup" inscription.
As already mentioned, it is able to be in the pussy one of several forms:
yellow - a warrior, hitting the enemy with powerful fiery discharges.
blue - swimmer, able to swim under water and blow bubbles there - so that they hit the opponent.
red - the destroyer, gnaws and fight their way to the rock. Destroyer can chew on a wall in the horizontal direction, or jump on the stone, crushing his jumps. Unfortunately, he was too tough, not all the stones, and only the most fragile.
Green - is even difficult to find the right word. The green uniform pussy can produce sticky thread, stuck to the ceiling and the walls, and then catch up on this thread. Also in this form of pussy can pull a small object.
In any form of pussy is capable of a few things:
- Run.
- Jump.
- Float on the surface of water (although the water it can fall only in blue).
- To push the blocks of stone lying separately.
- Collect coins.
- To switch to another form. But ... it is not available at every level of all forms. And it also happens that the ability to make some form of acquired and lost along the way.
After starting the game and select the language in which the game will interact with you, the screen displays the main menu (assuming that you have chosen English):
Replay Previous Game - Play has begun earlier. The "Fury of the Furries" is not save the game at any moment '.sohranenie occurs automatically every 5 levels you. Each stage of the game - the desert, lagoon, forest, etc. - It consists of 10 levels. The game can be stored up to 4 independent games - Game A, Game B, Game C and Game D.
New game - to start the game again. By selecting this menu item, the player further selects one of those referred to in the preceding paragraph, the four positions A, B, C or D; it is in this position will be automatically saved his game.
Sounds setup On / Off - enable / disable sound effects
Choice of Music Classic / Fun - Selecting background music for the game.
To control the movement of Fluffy use the arrow keys on the numeric keypad to the right and the Space key. Basically, the arrow keys move Fluffy, but the down-arrow key has an additional purpose: if you press it when the pussy is standing on a horizontal surface, pussy shatters into many small particles and is prepared to change shape. The arrows to the right and to the left, you can select the desired shape from those available at the moment, and the Space key press completes the process of changing form.
Space key in normal conditions allows you to apply a specific function for the form of Fluffy, in which it is located. Sometimes it requires to press the Space key together with the arrow key to use this function in a particular direction - say, to shoot in a certain direction in the yellow or blue uniforms, or to adhere to a specific surface in the form of green, etc.
In order to "blow up" Fluffy and start the level over again, lose one "life" is used Esc key. Most often it is necessary to use when the wrong action at the level of lead to the fact that it has become impossible to pass. And the F10 key ends the game, and on the screen the main menu appears again.
displays supporting information (from left to right) at the bottom of the game screen:
- Four forms of Fluffy. White frame allocated to the form in which pussy is at the moment. As already mentioned, not all forms are available at every moment; forms, which can not be transformed, painted black.
- The time remaining on the level of the passage.
- The number of collected coins.
- The number of remaining "Lives" Furrie.
‹
›
Home
View web version