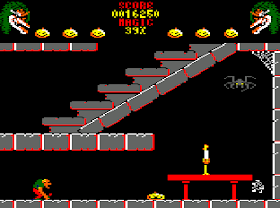 Genre: Action
Perspective: Side view
Visual: Fixed / flip-screen
Gameplay: Metroidvania, Platform, Shooter
Setting: Fantasy
Published by: Palace Software
Developed by: RamJam Corporation
Released: 1986
Platform: Amstrad CPC
Time has passed, and the new queen of witches has built a castle in the forest where she once had her hut, and from there she reigns in terror over all creatures. However, the pumpkin-warrior has decided to end that reign and claim revenge for what the witch did to become queen. For this he ventures into the castle, and gather the necessary objects to destroy the witch forever.

The player controls the pumpkin, and for this he must control the jump in a peculiar way that makes controlling the game somewhat complicated, he can only vary the direction or strength of the jump at the moment in which the pumpkin bounces on the ground. , so you have to calculate the jumps millimetrically to move exactly as you want to.
He must roam the huge witch's castle looking for various magical items. Each has a role in the game, and victory cannot be achieved if one of them is missing. Magic items always appear in the same places in the castle. It is the pumpkin that, in each game, starts in a different room, randomly. The magic items are as follows:
Lock of Hair: It is the basic ingredient of the witch's destruction spell, he will find it in her bedroom under the highest tower.
Once with all the objects collected, he must take them to the old cauldron of the witch that hides in the catacombs, to achieve victory. Through the castle there are multiple enemies that remove energy when touching the pumpkin, being they in turn destroyed, although they regenerate in a few seconds. To recover the energy, and thus obtain a means of shooting, some magical powders are found in various places that, when taken, restore the energy. The first time one of them is picked up, the ability to shoot is acquired, although each shot will consume a bit of energy. If the energy level reaches 0%, you lose one life out of the seven you start with. Some enemies take a life as soon as you touch the pumpkin: the horns of the gargoyles, the spiders, the skeletons (if you don't have the shield) and the witch's guardian, and you also lose a life if you fall into the water. With the witch he does not face directly, since she takes advantage of her dream to carry out the mission. Of course, the portrait of the witch laughs at the player every time she loses a life.
‹
›
Home
View web version