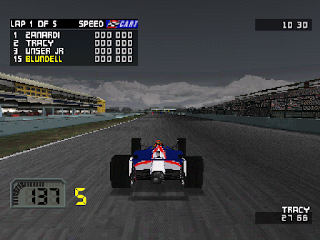 Genre: Racing / driving
Vehicular: Automobile, Track racing, Vehicle simulator
Published by: Sony Computer Entertainment America Inc.
Developed by: Sony Interactive Studios America
Released: 1997
Platform: PlayStation (PSX, PS1)
America's favorite Indycar racing game has appeared on PlayStation in the World Cart series, SCEA's first attempt at a racing game for kart enthusiasts. All cars, pilots (Al Unser Jr., Bobby Rahal, Gil de Ferran and others, each with an individual driving style) and tracks strictly correspond to the originals (according to the license obtained). The game features 25 professional pilots, 10 real tracks (Cleveland, Michigan, Long Beach and others), cars from Honda and Ford, Championship modes, Practice, individual race and 2 players (split-screen and link connection), etc. ... The oval tracks will remind you of the NASCAR series and will be a lot of fun. Tuning possibilities are not forgotten, you can customize your kart as you wish, but as in life, do not forget about the right choice, for example, tires, they must meet the conditions of the race, otherwise you will not see a victory. If you find it difficult to get used to the game, then you can switch to the Arcade game mode, where the conditions will be softer, and victory is more accessible. As of the release date, the game was in third place on the best-selling games list.