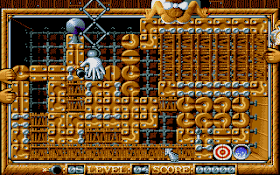 Genre: Action, Puzzle
Perspective: Top-down
Visual: Fixed / flip-screen
Pacing: Real-time
Setting: North America, Steampunk
Published by: Silmarils
Developed by: Silmarils
Released: 1991
Platform: DOS
Imagine being on the street the evening, you overcomes boredom, and all the usual classes disgusted. Soul wants thrills and previously unknown experience, and comes to your mind is a strange game. It's simple: we take the most ordinary bomb with a wick is longer, set fire to the wick and drop bombs to roll on the table with a sly system of collapsing bridges, reflector plate, the position of which can be changed, and the grooves, which can be rotated and steered slowly the rolling bomb on different paths, pipes within which the rolling bomb jumps that can throw it from one place to another, buttons, clicking on which the bomb is changing the configuration of the gaming table ... After a while, we take another bomb, ignite the wick, and embarks on the same table. The purpose of all this strange billiards - to drive a bomb into a bucket of water. Of course, this must be done before the wick will burn down to the end and the bomb explodes. It is undesirable to also drop the bomb on the table (concussion dynamite contraindicated), or allow the two rolling bombs to face - for the same reasons. 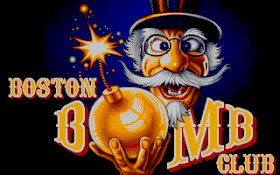 Is this idea did not attract you? Or maybe at hand just could not find a sufficient number of bombs? Do not worry, help the cause 'very easily.
Enough to run the original game French company manufacturing "Silmarils" under the name "Boston Bomb Club". As with most products of this company, the schedule is made exclusively nice and in good faith, and you will be required considerable skill in handling the mouse and the ability to quickly move his brains in desperate situations.
Several elderly gentlemen in Boston, not to be bored in the evenings, going to his club and have fun like this, as described above. I You are invited to try their hand at this weird dynamic-matching game and successfully smuggle a bomb with a burning wick in a bucket before the explosion occurs. The game has 30 levels; If you manage to go through without any problems the first couple of levels - do not relax. We assure you, more thrills enough for you, you just feel sorry for the beginning, and to reach level 30, need considerable training. By the way, you do not need to start the game from the first level; the maximum initial level, you can set yourself in the main menu of the game - the tenth.
In the beginning, at your disposal - 5 bombs. If you manage to successfully pay off all, then at the next level they will be much the same, but the bomb exploded irretrievably lost. The game ends with the loss of the last bomb.
The game screen is very simple - in addition to the type of the playing field, it shows the number of remaining bombs at your disposal and the current number of points.
The ultimate goal of each level - in terms of a target with red concentric rings. That's where you need to drop bombs before they burn down the wick. You have to think about which way to lead to a bomb, and there may be several ways. Changes made on the table with the mouse, from the idea to play with the keyboard can immediately give up. Point to the item of the playing field mouse and click the mouse button. If the element is able to have several positions (for example, a jumper, which can block any of the four sides of a square or straight trough which can be placed vertically or horizontally, i.e. only one of the two positions), this element will switch to the next position. For items with a large number of the provisions have to click the mouse even once or twice in order to achieve your desired position.
It also happens that you have paved the way to the goal is triggered only once - wooden bridges extremely flimsy and swept more than one bomb can not stand. These circumstances have to plan in advance so that it does not become an unpleasant surprise.
Bombs behave extremely passively and simply roll forward. If the bomb encounters an obstacle - it can rebound and begin to roll in the opposite direction, or fold to the side - depending on the shape of the obstacle. Sometimes in the process of moving their weight presses the bomb button, and somewhere on the playing field shifted jumper or other changes occur. However, do not think about one bomb care will solve all your problems; not at all! Shortly after the beginning of the movement of the first bomb on the field rolls out second, then - the third ... and so on, so take your time - to cope with a number of bombs is very difficult. However, sometimes one has to use the bomb to press the button and release the path of another.
The main elements of the playing field, which you can actively manage - jumpers and grooves. Jumper simply moves from one position to another, and a circle with a groove turns 90 degrees in a single mouse click on it.
Sometimes on the field there are prizes with these glasses on them. If you rolled a bomb on any prize, you will receive the award in the form of points, and for the achievement of a certain number of points are new bombs. In general, the game is worth the candle.
Bombs can not only roll on the field, but also to jump on trampolines installed there. Please note that on each springboard, throws a bomb, is a figure indicating the flight range. Planted bomb continues to fly in the direction in which it is moved to expose the trampoline. If the bomb at the end of the flight gets past the playing field, it explodes.
From time to time you play at the prize level, where your task - just bring a bomb to the "output" of the time, which is counting on the screen, and on the way collect as many bonus points.
Finally, all was not so simple, your colleagues in the club in every way complicate the task of you. That someone lays out the newspaper over the important and crucial portion of the gaming table, and you have to catch the moment between flipping pages in order to in a desperate hurry to throw a couple of reflectors or expand a groove. That sounds wild sound of the trumpet, and above the table begins to turn Negro jazz musician, distracting and annoying ... That old man, carefully watching the rolling bomb begins to rearrange the parts of the playing field; perhaps he believes he knows better how to play.
Extremely unpleasant baby crawls on the table - it shifts bombs and switching elements table as pleased. Honestly, sometimes very much want to bomb tore under his nose. At the last level on the playing table start running toy trains, collision with which the bomb is contraindicated - and so on, will not disclose all the secrets that you get more pleasure from this original and enjoyable games.
‹
›
Home
View web version