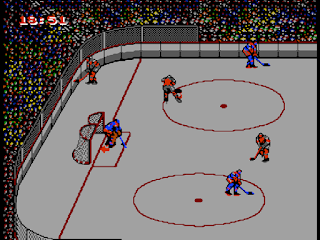 Genre: Sports
Perspective: Bird's-eye view
Interface: Direct control
Sport: Hockey
Published by: Konami
Developed by: Konami Industry Co.
Released: 1988
Platform: Nintendo (NES)
There is no splash screen in the game - we are immediately greeted by the title screen and a voice that very clearly pronounces the name of the game (a rare phenomenon for those times). The game menu does not indulge in abundance: 1-2 players, several difficulty options and
game mode - friendly match or fight for the cup. We select a team (how they differ except for the color of the form and the name - only the creator is known) - and on the ice.
Here I have to upset the ardent connoisseurs of sports ... The developers did not bother with obtaining licenses. Therefore, in the game we will not see any NHL stars, or familiar teams (the names of cities do not count) ...
The teams go to the rink accompanied by perky music, and we see a very pleasing picture. The players are well drawn (arms, legs, clubs are in place), the animation is also great, plus add the high speed of the game here. The pitch is of normal size, with correct markings, and jubilant stands are available. The view of the field is standard "television", from the side and slightly from above.
It's time to deal with the controls. It is very unusual in this game: the fact is that you simultaneously control the player (the controlled one blinks so as not to confuse) and the goalkeeper ... Yes, yes, in this hockey there is a "manual" goalkeeper, and you cannot change it to an "automatic" ... The arrow next to the goalkeeper moves from corner to corner. It is at her that you need to look in order to beat back (well, score, of course) the puck. With the players, everything is a little easier - the hit button, the pass button and ... that's it! In defense, the buttons are not used, but the computer chooses which player to play (and it will not necessarily be the closest to the puck).
It’s even easier (although it would seem much already) that the game deals with the rules of hockey: there is only one rule, and this, oddly enough, is icing. The selection of the puck occurs in the case of a successfully intercepted pass or by repeated ta-
opponent's wound. If the opponent's player is not timid and does not want to just part with the puck
(after the ram), a brawl will occur, which in turn can turn into a full-fledged close-up fighting game. And what is most unusual - after the fighting, the referee takes only the losing player to the penalty box (a very strange rule, even for such a game).
A scuffle in one of the face-off zones will inevitably lead to a shootout. Which is made here in the manner of a football penalty - you control not the player, but the direction of the puck.
With the basics figured out it's time to play. A computer player, of course, is a good opponent (especially at maximum difficulty), and you can even compete with him for the cup. But, as in any sports game, the game with real people is more fun (it's a pity that there is only one mode for two).
If you collect all of the above (high speed, easy control, good graphics), you get an excellent game, especially for those who do not want to understand all the intricacies of real hockey. For those who crave real hockey, I recommend that you familiarize yourself with the next game.
‹
›
Home
View web version