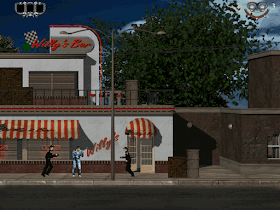 Genre: Action
Perspective: Side view
Visual: 2D scrolling
Gameplay: Platform
Interface: Direct control
Published by: Microfolie's Editions
Developed by: Virtual Studio
Released: 1996
Platform: DOS
Adventure game with elements of arcade platform. To be honest, at first I appreciated it is not appreciated. Graphics, as can be seen on screen, not bad, but nothing that distinguishes this game from many other arcade platform, I have not noticed. It was only after returning to it after a few months in order to make the screenshots, I realized that The Intruder - not an easy game, as it seems at first glance.
On the plot of the game, I could not find anything. All of its reviews on the Internet are limited to three lines in French or German. There are no scripted scenes and dialogues have been reported, so that the conclusions have to do from the gameplay. The protagonist of the game, in the view - it is a regular guy, but with a gun in the city is filled with strangers, which took the form of the police. Aliens (shown their true form just before his death), are determined to kill the main character, and you therefore need to prevent them from doing. At least in order to find out what lies behind the mysterious name of the game.
The protagonist is able to run, jump, knows two steps Kung Fu ("Dyno-goy-nya" and "Dair Khoi-nya") and knows how to shoot a gun. However, the ability of the latter is quite useless, considering that the opponents are extremely deftly dodge bullets, and their number (bullets instead of enemies) is rather limited.
Opponents, if we were talking about them, seemed to me to be extremely difficult. Even the most ordinary alien disguised as a policeman with a truncheon, has this very truncheon further than the hero kicks. What to say about police officers and a soldier with a rifle, throw grenades ... Fortunately, the opponents do not seem to revive, but without it the murder of each of them - almost a feat.
Now tap, differentiating from The Intruder average arcade. Firstly, the hero is a stock, in which he, in addition to a piece of strange yet unknown destination, covered with red question marks can be worn mine in the future many other useful (and not) devices. Secondly, walkthrough nonlinearly. Despite the fact that throughout the game you're watching the character side, the character is not restricted in their movements only two directions. It can turn off to the side, so not moving at all times directly and freely exploring the city. Opponents also are not limited in their movements one screen, and once he saw the protagonist, will haunt him until his death, her or it.
I think it's obvious that The Intruder, despite the almost total obscurity - a game that is worth a try. Although I can recommend it only patient people. Too complex there opponents.
‹
›
Home
View web version