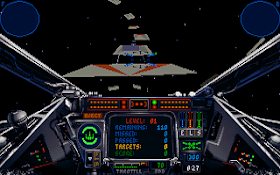 Genre: Action, Simulation
Perspective: 1st-person
Pacing: Real-time
Vehicular: Space flight, Vehicular combat
Setting: Sci-fi / futuristic
Published by: LucasArts Entertainment Company LLC
Developed by: LucasArts Entertainment Company LLC
Released: 1993
Platform: DOS
A masterpiece of entertaining movies - "Star Wars " - could not appear in the form of computer games, this fate is inevitable for any popular film. The only problem is that very often the films created outright trash , calculated only on the known prior art.
Retell the plot of the game and the movie would be pointless - most people already familiar with the adventures of Luke Skywalker and his struggle against the Empire that seeks to enslave all the peoples of the galaxy. If someone has not seen the film , the narration is still not give any impression of the amazing scope and entertainment filming.
Luckily , George Lucas did not give the right to their offspring outsider firms , and the " Star Wars " were embodied in the form of a computer game " home " by the company "Lucas Arts". "XWing" did not come out at the time of maximum popularity of " Star Wars " , the creators of this game just does not have the time , conscientiously made ​​the game nevomozhno do in a month or two. The game really deserves the highest ratings - intermediate rollers in the game is not inferior in quality to the film fragments , and the space battles are breathtaking its realism . 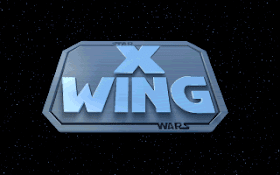 Surprisingly, the protagonist of "XWing" is not Luke Skywalker and Han Solo is not even , they do not appear on the screen. No, you have to fight for an unnamed Private Pilot Rebel . However, without these nameless protagonists pilots would not be able to do their deeds .
In "XWing" schedule is implemented in the battles of the vector principle, that is, objects are represented as a set of relatively simple geometric forms. This approach facilitates the task of scaling and rotation , allows to achieve a smooth and high speed. This game is not felt abstract form , the ships look and move very naturally.
In principle, all types of Rebel fighters are arranged almost identical , the differences mainly concern the first flight parameters such weapons.
The main types of fighters armed rebels .
"XWing" - the most versatile and multi-purpose machine , dubbed thanks to the distinctive X -shaped silhouette when viewed from the front . Armament consists of four laser and proton torpedoes . "XWing" able to fire four lasers at the same time , despite the rapid consumption of energy, it is justified by the increase infestation of affected area . olueksperimentalnuyu on the car "XWing" pinned great hopes in the fight against the Empire.
"YWing" - characterized by slow-moving and most powerful weapons and armor , as you might guess , its silhouette from above resembles the letter Y. It is worth paying attention to the set on "YWing" ion cannons capable of paralyzing the enemy ships .
"AWing" - the fastest and mobile machine, the main purpose of which - intelligence. As the shock force has no practical value.

The power system of fighter aircraft

Energy produced by the reactor during the flight is spent on three objectives:
- Firing from energy weapons - lasers , ion cannons.
- Maintenance of the protective field that reduces damage from enemy hits .
- Powered engine fighter .
The pilot has to maintain a reasonable balance between the three objectives and to change the distribution of energy during flight. It can increase the charging rate lasers or recovery protection, but then automatically reduces the speed of the fighter . In fact, you can achieve any desired relation between the distribution of energy.
The protective field is free to be redistributed between the tail and nose to protect the fighter with the most likely direction of fire.

All kinds of weapons set are divided into two groups: energy and ballistic . For firing of weapons consumes energy reactor, recovery is performed over time. Number of rounds of energy weapons in principle not limited. Ballistic weapons is limited to use of ammunition taken on board , but the rocket can automatically pursue the enemy ship , and the impact they have higher power .
The delivery of fire of any weapon can be fired as single shots and double - and even quadruple the fighter "XWing".

The robot R2D2, mounted on a fighter , not only controls the navigation system , but also helps the pilot in combat. Fighters move very fast, and trying to shoot at the time of hitting the target to cross-hairs are unsuccessful ; lack of a second, so the goal has shifted outside the affected area. R2D2 calculates the target course and serves on the screen to shoot the yellow signal with a lead (this must be enabled hover mode ) . This, however, does not mean that it is absolutely impossible to fire without the aid of a computer , as the imperial bombers and interceptors fly slowly.
For use ballistic weapons is highly desirable to "grab " the purpose ( without the " capture" of missiles can be fired except in emphasis , sometimes it's even better ) . To do this, place the center of the sight as close as possible to the target and wait until the computer for a few seconds to prepare and will give a signal .

Special jump drive allows the ship to travel through hyperspace to the enormous distances. Except that it is used to transport fighters to the location of the job and return to base after its completion.

If you want to compete with George Lucas in the shooting of space battles, including the establishment of on-board camera and throw yourself into the fray. Then on the basis of a quiet location to watch a movie on your adventures.

TIE-fighters - Most mobile and at the same time the most fragile Imperial ships . Apply only to the destruction of small space purposes , as against armor corvette cruiser or weak fighter lasers are powerless . One lucky volley pair of lasers is sufficient to destroy this ship.
TIE-bombers - Although the bombers do not pose much of a threat to the Rebel fighters , bombers, torpedo salvo level in two accounts carries a large ship . In no case do not let bombers close to protected your vehicle and intercept them away !
TIE-intereeptors - Hybrid fighter and bomber and a dangerous opponent for rebel fighters. Fortunately , the speed of the interceptor and its mobility is not that great , and you can handle them .
Assault Gunboat - It is a dangerous and difficult enemy that has greater firepower. Vulnerable point of assault boats is their slow speed , so it is recommended to attack the tail .
Space fighter - a complex machine and manage it easily. Without a good joystick "XWing" will not give you any pleasure . Although it is theoretically possible to play with the mouse , but in reality it is daunting .
The joystick implemented only the most common functions - moving and shooting. Everything else is done with the keyboard.
‹
›
Home
View web version