Woodruff and the Schnibble (Win3.x) 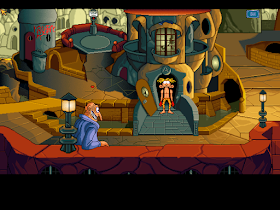 Genre: Adventure
Perspective: 3rd-person
Gameplay: Graphic adventure, Puzzle elements
Setting: Post-apocalyptic, Sci-fi / futuristic
Published by: Sierra On-Line
Developed by: Coktel Vision
Released: 1995
Platform: Windows 3.x (Win3.x)
The last game of the wonderful French company Coktel Vision, Woodruff and the Schnibble of Azimuth or The Bizarre Adventures of Woodruff and the Schnibble, as it was called in America - a very unusual and controversial quest assessment which I will try to give in this article.
When you turn on the game show intro. Completely incoherent and forcing myself thinking the player, what did the creators wanted to say ... maybe it's right, because all the misunderstanding clarified in the course of the game. A few facts, however, immediately clear - there Boozook city on a mountain in the jungle, which turned into Earth after a nuclear war. Boozook - these are mild mutants with long ears, a long nose and tail. Imagination of artists was, as in previous games, great, and therefore no analogues pick up does not work, and although all the  Boozook different (there's even a cook-black), something in common they all share, and to distinguish human from Boozook complexity is not . 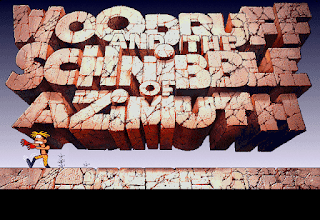 They lived in the city and did not touch, when he got out of the underground shelter to the surface and the first thing people brutally seized the city and turned Boozook into slavery (the reason for this behavior is partly explained after Woodruff gets into the past, while this terrible battle).
The game takes place much later, when people bouzouk and relatively peacefully co-exist together, but everywhere there is poverty, desolation, fear, hate, plus everything else and the bureaucracy and ruling all these crazy dictator Bigvig (with an iron nose, from which can be fired) . In the intro shows how this very Bigvig comes to the house of the scientist Bearing and kidnaps him, simultaneously shooting the teddy bear his adopted son Woodruff. Woodruff himself, he does not find, as the azimuth had to hide it.
The game begins at the entrance to the house Azimuth, but instead of baby-Woodruff is a quite strange punk in a leather jacket, which just barely, but you can guess that Woodruff. As it happened - no one explains. Generally, those who like to plot accurately and clearly explained to and from, this game is clearly contraindicated. Just absolutely, I mean, if you do not use the passage. Speaking of passage - I categorically opposed passages, but lasted only about 2/3 games, then had to look, and in the end had to look again 5. But considering what to senility reached the "mystery", it seems to me that this is still not enough.
The main advantage of Woodruff - this is how the creators were able to show the evils of society, corruption and rottenness of all that we see in reality. This is not a typical tale of how a superhero killing baddies, then we have to deal more strongly rooted evil that has lodged itself in the inhabitants of the world (although, as it turns out in the end, all the same shape it is quite certain, though, I think it was a bit vain). And the hero we do not have the toughest: what can we expect from a man with a soul-bouzouk baby (after all, he has remained at the level of development of the child, of whom turned into an adult.) At a certain point in the game Woodruff of desperation just sit on the bench and refused to get up. But all ended well, as well, even in such a situation can not lose (although towards the end it turns out that you can still lose, so you need to carefully monitor the savegames).
So, like everything that I was going to tell you, I'm told, and now we can take stock. The game is very difficult to assess fully, some components - such as the excellent graphics, great characters, and the idea that forms the basis of the plot, - offset creepy illogical puzzles composed hands of the sadistic and some inconveniences associated with the inability to stop the beginning of something to say character , and a rather sharp and unpleasant sounds (when early Woodruff delivered his ill-fated monologue, there is a sound one, in which I prefer to shoot headphones). On the other hand, the pass game was very interesting. Some innovations have loved, such as the preparation of magical formulas and picking up other related items (notes, sounds magical, ability, which gives the Master, and the like) in a special inventory slot. In general, I liked the game, but I do not think there are many people who will be able to pass it without passing. It's a pity that there are no jokers like a goblin, would be very useful. The main thing - do not play right on the passage, then that is not what will be. And so it is possible to recommend lovers of quests.
‹
›
Home
View web version