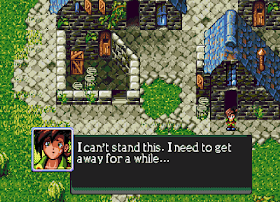 Genre: Role-Playing (RPG)
Perspective: Top-down
Art: Anime / manga
Pacing: Turn-based
Setting: Fantasy
Published by: WaterMelon Co.
Developed by: WaterMelon Co.
Released: 2010
Platform: SEGA Genesis / Mega Drive
The main characters of the game - Hoston, Alina and Edesott - live in the peaceful town of Reg. Hoston searches for a rare plant to help his ailing father, and uncovers ancient ruins that Alina's father, an archaeologist, is well aware of. A family conflict over the ruins leads to the flight of Alina and her friends from the city; in the future, the heroes face the last representatives of the ancient race and the villains who pursue these creatures in pursuit of some knowledge. In the future, this story develops into a much more intricate plot of Pier Solar.
‹
›
Home
View web version