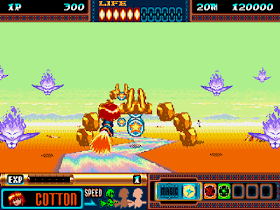 As in all games in the series, the plot of the game revolves around a magical sweet called willow and the desire of the main character of the game, the little witch Cotton, to get it.

Unlike previous games in the series, which were horizontal scrolling shooters, Panorama Cotton is a rail shooter with pseudo-3D graphics and a rear view (similar to Space Harrier).
The player can move around the screen in two dimensions. He must destroy opponents and avoid collisions with obstacles. The game has five levels, divided into zones. The player can choose one of three difficulty levels.
‹
›
Home
View web version