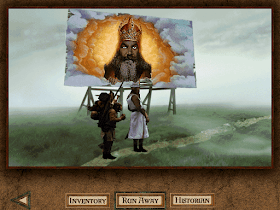 Monty Python and the Quest for the Holy Grail - a comedy adventure game in which you along with King Arthur and his Knights of the Round Table at the urging of God and of British directors ( and just incredibly fun-loving people ) called "Monty Python" , go camping for the sacred Holy Grail .
Kill the Black Knight Burn the witch dead Throw , catch a cow - all these game titles, you will be able to play during his historic campaign and in which the authors are tastefully mocked already become classics of their genre games.

The game is strictly contraindicated for people with unstable nervous system . Any attempt to stay in the game in a bad mood doomed to failure. In any case , do not remember a scene from the game in public - your laughter can cause a disproportionate reaction in the service of the house and if there had not yet played in the " quest for the Holy Grail ." Game play is a particular danger for people with morbid attraction to beauty. Due to the fact that the game is replete with scenes of cruelty and violence is not justified , as well as illicit sexual.