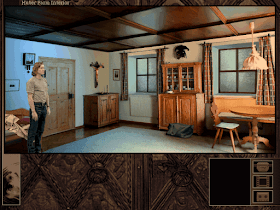 Genre: Adventure
Perspective: 3rd-person
Gameplay: Puzzle elements
Interface: Point and select
Narrative: Detective / mystery, Horror
Published by: Sierra On-Line
Developed by: Sierra On-Line
Released: 1995
Platform: DOS
In the game's story intertwine German popular mythology and the real facts from the history of Bavaria. From ancient legends borrowed stories about werewolves of German history - the events of life and reign of the "last of the true King of Bavaria" Ludwig II. These components are added to the traditional mystical and historical detective components - bloody murder, "secret society", sexual intrigue. The main characters: the ingenious and resourceful American writer and bookstore owner and part-time private detective Gabriel Knight and his assistant in the affairs of Grace Nakimura. At the end of the last part of Gabriel inherits a castle in Bavaria and the Ritter family Shattendzhager title. However, as it turned out, this honorary title imposes on its owner a serious commitment - to protect the local population from attacks supernatural beings. Attacks werewolves and other mythical monsters are long gone, but did not move to Gabriel castle of his ancestors, and to put in order their new property as his ability Shattendzhagera were in demand. The inhabitants of a small village hired him to investigate the horrific death of a little girl - they believe murdered by a werewolf. Gabriel and Grace to solve multiple puzzles in Munich, the famous castle "fabulous" King of Neuschwanstein, go to the deep forests of Bavaria. Their efforts will be rewarded heroes learn the "truth" about the mysterious death of King Ludwig II and find the "lost" opera by Wagner. 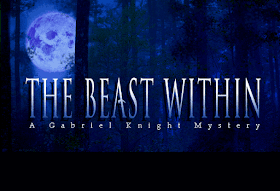 The game is divided into six "chapters", one CD-drive each. The player alternately controls Gabriel and Grace. The main characters are investigating separately: Gabriel in a suburb of Munich, and investigates a series of mysterious attacks and Grace Rittersberge collects information about famous black wolf werewolf past and goes to museums and other sights of Bavaria, studying the "white spots" biography "fabulous" King Bavaria, Ludwig II. By the end of the game heroes to combine their efforts for the successful completion of the investigation.

The victims of the attacks.

Before beginning an investigation Gabriel was aware of three episodes of the attacks and four deaths. None of the victims of the attacks did not survive, the bodies were torn to shreds, some partially eaten. At the murder scene were numerous traces - a reddish-brown fur, saliva, footprints, similar to the wolf or dog. According to the clues in all cases there were one animal, the test results detected wool and other traces clearly indicated the innocence of the murders have escaped from the zoo wolves. This, however, has long silenced by the police have set up for their capture.

A company involved in the affairs of the family Ritter. Office is located in Munich at the Marienplatz, 21 right in front of the subway exit. The office has the full and credible image of the family. With all of the issues and challenges should contact Gabriel «Übergrau» in the first place. There's valued loyal customers and ready to fulfill even the most extravagant and time-consuming request potchas not related to the business of the firm. Moreover, to maintain the credibility of the company does not charge fees to prominent clients - such as Gabriel von Ritter. The company belongs to no one elderly gentleman Ubergrau, who personally does not appear in the game.

An elite men's club in Munich, on Dinnershtrasse, 54 (Dienerstraße, 54). According to the steward of the club, The Lodge - a very ancient society, but the club was founded relatively recently, in 1970, Baron von Glover. The club is located in a private villa, has considerable assets, including several hunting lodges in the Bavarian forest, where club members regularly travel to the joint hunt. The club consists of only 5 people, not including the President, Steward and newcomer Gabriel. This is due to high demands for beginners (belonging to the ancient German birth, surety of a member of the club, etc.), and the policy of the founder of the club. However, recently the Baron von Glover, to the dismay of some "old-timers", has become too liberal. For example, Gabriel was not difficult to join the club on a "personal guest" Baron. Members of the club unites noble origin and material well-being. In addition, Baron appreciates personal and business qualities of the applicant. Finally, an important rallying point is the "philosophy of the club," the ideologist of which is the background Glover.

A small but very ancient town in Bavaria. Located close to the west of Munich. Founded by Martin Ritter in the first half of the XIII century. City Building was completed in 1438, when the city walls were erected.

Residents of the city

Other places in Bavaria

Academics and consultants in other countries

Heroes of the past

The process of filming

The shooting took place in a small studio in the town of Oakherst in California, where the headquarters of the Sierra. Film-making process led by director Will Binder.

Interesting facts about the game

Errors in the game