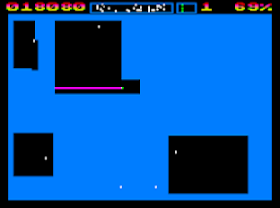 Genre: Action, Puzzle
Perspective: Top-down
Visual: Fixed / flip-screen
Gameplay: Arcade
Interface: Direct control
Published by: Lynsoft UK
Developed by: Firebird Software
Released: 1987
Platform: Amstrad CPC
Press Y or N on keyboard and wait start game.
The game Zolyx, created by Pete Cooke is pretty well known. It is necessary to paint over 75% of the playing field, cutting off from it with a saw large or small pieces. During your hard work, you get in the way of balls flying inside an unpainted field. When one of the balls collides with your saw or the track left by it, the irreparable will happen. Long time is hindered by the time that inexorably is going on, and a ridiculous creature running along the curb of the unpainted part of the field. If you began to cut out a piece of the field, but suddenly thought about the meaning of life, then you will be sent after the messenger, who grabs you for ... well, apparently, by the hand. In general, you can not relax, you are constantly in suspense, which can be removed only by the inscription GAME OVER, which inevitably appears on the screen.
‹
›
Home
View web version