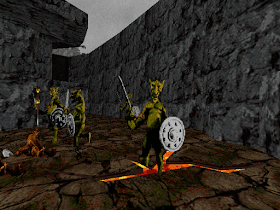 Genre: Action
Perspective: 1st-person
Interface: Direct Control
Setting: Fantasy
Published by: IntraCorp
Developed by: Capstone Software
Released: 1995
Platform: DOS
Originally this game was positioned as the action in the first person (in other words - FPS) with light role-playing moments. Moments worth noting not only the lungs, but rather weightless. The hero, a kind of medieval witch hunter, and perhaps - on the contrary, the witcher, trades that cuts evil. There is such a work, it means that evil hack.
In contrast to the same Hexen, arms at his main contact: dagger, short sword, bludgeon, mace, two-handed, halberd. Sometimes in your left hand you can still take the shield, which is very impressive chopped (by the way, is a very interesting idea which I have not seen anywhere else). Skirmishes are conducted using a bow or throwing axes. An interesting feature that often rescued from seemingly hopeless situations - of arrows you can easily make a ladder to get into the hard to reach corners of the card.
The previously mentioned light RPG elements - counter exp (I do not know what it affects), a set of bottles (treatment and antidote to invisibility) and book with spells (quite useless, for the most part).
Level design - not too memorable. What a grim, gray-brown tones. Monsters under become ugly (see the efforts of the artists) and die bloody. What else, in fact, needed for a noble-hand combat?