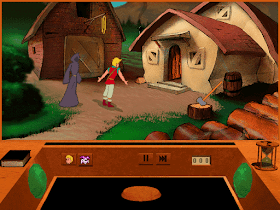 Genre: Adventure
Perspective: 3rd-person
Visual: Cinematic camera
Setting: Fantasy
Gameplay: Graphic Adventure, Puzzle elements
Published by: Sierra On-Line
Developed by: Sierra On-Line
Released: 1995
Platform: DOS
An expert on all kinds of space, the humorous and tragic mysteries, which are the epitome of high-class quests, Sierra this time introduces us to a romantic-comic quest Torins Passage, established as experts say, in the best traditions of this warm gaming company.
The game is so humane and non-combatants that do not even believe in its American origin. I'll start with the fact that here no one is killed - the only exception is a character who is just too tightly packed (besides almost single-handedly). Continue in that mission by Thorin nobility comparable with the adventures of Chip and Dale: guy is going to pull out the parents (or those who believed their parents) from the magic captivity. Along the way, he is like a chistoprobny Ivan the Fool, constantly helping someone, for someone produces something, at the very least with genuine compassion listens to other people's complaints. You an invitation to the ball? - Yes please, you pad? - So do not you worry,
Xia, you fertilize? - Yes it's me in a flash. Here's a he ducky, this young man Torin. 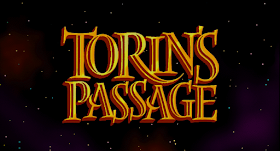 However, the good Thorin creates not one. He also had an assistant named Bugle. In the literature, this character was last mentioned in Pushkin in "The Tale of Tsar Saltan" (remember, this is when "the queen gave birth to a son that night is not a daughter ...?"). Being a typical unknown critter, Bougie has three compelling advantages over Thorin. First, he did not have anywhere to climb for a word - just one word and
it is constantly in the language: "Bwark!". Second, existential fork "To Have or to Be?" Bugle confidently chooses "to be." If you have to carry Thorin veshi in the bag, and the bag and then tries to fall into the abyss, the Bugle can even transform itself into a lamp, even in the shovel. I. Finally, he fioletovozeleny that in our time, you see, is very important.
Storms and Bugle need to spend five very different levels, each of which requires you to use more and more new qualities. The Lands above - a very beautiful place, there, in the crystals was born and grew our Thorin, will call you to the greatest possible care, in Escarpa - well, a very beautiful place to live multicolored cliffs shorty, will have to make to the care of ingenuity, in Pergola - very beautiful place, inhabited by a variety of midgets and one that fell there in the sediment eskarpiyskoy Princess Lina (not shorty, which is strange, and even a maid, enjoyable in every way (sorry for nested parentheses - a habit))) will have to add to the above abstract reasoning; in Asthenia - terribly beautiful but lonely place, amazingly similar to Dante's hell interspersed with gentle parody of modern military equipment, will have to make to these virtues and more remarkable patience in Tenebrous - finally agrarnoteatralnoe beautiful place to crown the holiday, to add to the compote qualities of wisdom.
And there ... (At the request of Al Lowe cut end of a paragraph. - Editor.).
By the way, Al did not ignore our valiant homeland. One of the least friendly scarps characters - the two-headed eagle (literally - the bar, but it looks eagle). Insightful Lowe gave it a constant tension between the heads, suspicion and greed. To overcome the eagle is given a ham, but if the ham to feed one of the heads, the second you will be greatly displeased and will not allow further. What to do? Similarly, as with the real Russia enters the real West - ham tease, but do not give, and then hurl it into the abyss. After a debate between the head eagle goes behind ham, clearing the way Tori well. If you knew about the vengeful El, how sickening your jokes.
Paradoxically, the most useful passage "Thorin" can bring the two categories of people. First, politicians. Maybe even before then they will reach that eliminating problems in the surrounding useful and even eliminate themselves less damage, that all men (and other people) should be different, but because the amount they desire, as a rule, are feasible, that the way to goals slippery and consists of separate steps, each of which must consider and negotiate, even with the grass. Second, not politicians. This category of the population will be able to briefly forget about the first category, and feel themselves children, trapped in a magical and very intricate story with a good ending.
‹
›
Home
View web version