The Legend of Kyrandia: Hand of Fate (DOS) 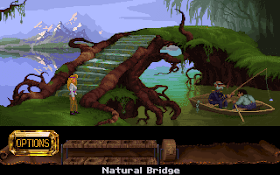 Genre: Adventure
Perspective: Bird's-eye view, Side view
Gameplay: Graphic Adventure, Puzzle elements
Interface: Point and Select
Setting: Fantasy
Published by: Virgin Games
Developed by: Westwood Studios
Released: 1993
Platform: DOS
The second of the game on a magical land Kirandii undoubtedly will delight you with its magnificent and expressive graphics. The game is full of humor and funny "jokes"; in many places, like the authors mocks the genre of "quest". Crooked and steep nature of the main character zantii leads to a lot of unexpected events and funny.
Country Kirandii was saved from the evil jester Malcolm, but ... there was a regular attack, and this time more serious - Kirandii slowly and inexorably disappearing from the face of the Earth. Disappear stones and trees, people and buildings. The Royal Mystics rulers Kirandii, scratching their heads and search through piles of books in search of the way to the. Salvation of the country.
Shortly before these events Kirandii a strange creature. Externally, it is the most common hand, without a head, and other relevant parts of the body. Hand became assistant magician Marco, but as it turned out, it is capable of and more. To execute the proposed plan of salvation requires hand mysterious "Anchor Stone" from the Center of the World.
Take the stone instructed the youngest of Royal Mystics - zantii sorceress; Zantiya it becomes the protagonist of the game. Get to the Center of the World is simple, because zantii house has all the necessary equipment ...
Start the game, you get to select one of four options:
Start a new game - to start the game again.
Introduction - look intro.
Load a game - to load previously recorded game.
Exit the game - exit to DOS.
Management actions implemented Zante game is very simple. You must hover over any place of the screen and click the mouse button. If your location can generate some action (for example, to bend the carpet in the house zantii - a small tip, or talk to your companion encountered), then Zantiya will do exactly what is required. If you specify the mouse on the most common location on the screen that does not require any action, then Zantiya just go there. By the way, you may find that the screen you have done everything you wanted, and you want to go further. In this case, you need to bring the cursor to one of the four sides of the rectangular screen and see what it will take shape. When the cursor looks like a prohibitory sign - there is no progress, and if you like an arrow - so you can go there, and you just need to click the mouse button. Similarly, you can enter the door of the cave, etc.
In addition, in your travels you will come across items that you can take with them for future use (for example, the house is zantii bush blueberries, valuable component of magic elixirs). To take an object, you click on it mouse button, the cursor takes the shape of an object taken by you, and you will most likely want to put him in the midst of his property. Drag the image of the object on the bottom of the screen, there is shown a shelf, and then click the button, the object will take its place on the shelf. Simple, is not it? If you now want to use the object, then you click on it again mouse button, move the cursor to the place of use of the object and click the mouse button again. If you have proposed a method of using the subject corresponds to the plans of the creators of the game, it needs to happen something interesting, if not - you will object.
It is quite possible that you have a lot of things and portray them all on two shelves at the bottom of the screen is not possible. Then you will be able to touch your existing items by clicking the mouse on the arrow next to the shelves.
Finally, in the lower left corner of the screen there is a button that says OPTIONS, with it you can go to the main menu of the game with the following features:
Load a game - to load previously recorded game.
Save this game - save the current game.
Delete saved game - to delete a saved game.
Game controls - setting the parameters of the game (the music volume, the volume of sound effects, etc.).
Quit playing - out of the game.
Resume game - to get out of the main menu and continue to the point where you left off.
At the bottom of the screen are two more important subject: the book elixirs and the boiler, but they will appear in the game at once. Recipes potions contained in the book will be given in the description, so you do not have to read it, but the pot is very important, there are mixed all the ingredients elixirs. Sometimes it is necessary to pour the entire contents of the boiler and fill with clean water to do this, click on the chain next to the boiler.