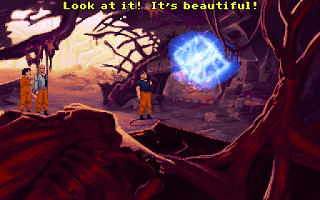 Genre: Adventure
Perspective: Side view
Visual: 2D scrolling
Interface: Point and Select
Gameplay: Graphic Adventure, Puzzle elements
Setting: Sci-Fi / Futuristic
Published by: LucasArts Entertainment Company LLC
Developed by: LucasArts Entertainment Company LLC
Released: 1995
Platform: DOS
All of you probably watched the movie "Armageddon", in which the team is not professional astronauts to save the Earth from a huge asteroid. There's even starred Bruce Willis. Then, the film seemed megakrutym, his formula was in many ways a novelty. However, there is one game, the story is set to the same scale, but is not focused on a WOW-effect, but on reflection, largely philosophical. And this game was created by the studio Lucas Arts, the same one that gave us the SCUMM engine, the game Monkey Island, Sam & Max, a series of games about the adventures of Indiana Jones and many other remarkable quests. Almost always, these games were not serious, they did not have any complex psychological motivation. And they were funny.

This quest is not even perceived as a game, it looks like an interactive movie where you play the role of power, which will guide the characters in the script channel. This is the story of a team of astronauts (which, incidentally, is voiced by Robert Patrick), reporter and geologist, who, like the oil of "Armageddon", went on an asteroid approaching the planet, in order to avert the threat. Only the finale of this story was different. The bombing is not much damaged space cobbles, he opened astronauts access to the insides lumps, which proved to be an ancient spaceship with a very distant planet. Heroes accident (not without the help of the player, of course) and activate the ship in no time get to the very planet from which the spaceship was launched. And then begins a complicated and sometimes twisted pretzel plot, full of psychology, emotions and adventures ...
Of course, you can tell it all, but why spoil the impression of you, dear players? When the team is on the planet - the heroes gain relative freedom in the research space, in which they found themselves. It is dry, dead land, with many traces of the existence of an advanced civilization once. Heroes explore her roam around the ruins and expanses, chatting, arguing, think, reflect, die ... The singularity of the game is beautifully written script, a fine story on the psychology of the game and the player's feelings and loneliness. Nearly all quests that time present a sufficient number of characters with whom you can communicate, it does not matter - on business or simply exchange a few jokes. The Dig but it is not. Even jokes almost there. On heroes constantly presses oppressive atmosphere of a dead world, the desire to return home and other shocks that occur during a game. I would compare the atmosphere with "The Odyssey," Kubrick, or relatively recent Moon in 2112.
Small Easter egg: PDA main character can be used not only as a convenient means of communication, but also as a way to escape, playing the mini-game Asteroid Lander (analogue of the famous Lunar Lander).
The truth is quite the traditions of the genre and their own games LucasArts does not moved: the characters (most often the hero - crew commander) comment on what is happening is quite willingly, as well as found objects or places of interest. Without this, neither as, otherwise the player will not be almost no clues what to do next, and the classic point-n-click adventure turn into mistoid, but that's another story. Puzzles are quite common, but their solutions, for the most part, are very serious and logical, do not destroy the style of the game. A lot of abstract puzzles, not tied to any competitive object or domestic case. A prime example is unlocking the doors with the selection codes to them or running ancient machines in the same way. At this stage, many were broken, because some puzzles were very, very hardcore, and the Internet in the 1995m, he was not everyone, you know. This is perhaps the only negative of the gameplay that I met throughout the passage. While someone may seem simple tasks, like boiled potatoes. The rest of The Dig - a reference "Lucas" quest, and it is excellent!
I have often compared the game with the film. Who will be compared with the cartoon, for stunning graphics. It is good now, and only seventeen years ago was simply unmatched. And it does not have a single drop or grotesque buffoonery, as opposed to the Sam & Max and Monkey Island. Most of the picture on the screen was like cartoons from Warner bros., Only more adults. If you watched the cartoon Titan AE - you'll see what I mean. Artists have not stinted on the excellent animation as the characters movements and their persons. And at different distances from the camera, we see a different detail, and when the character as close as possible, then we can consider all the talent of the artists. More details we can see only during the dialogue, when we show enlarged images of the characters faces. Mimicry is unmatched, but sometimes that slips cartoon. Fortunately, at an opportune moment. With special effects artists and animators have worked or slightly worse than with the characters, and even some fascinating landscapes appear before your eyes ... All this is graphical plot and magnificence could fuck up a bad sound or acting, but the developers know their business, and in this aspect they never misfires. Music and sounds complement each other perfectly, creating the very unique atmosphere, which remembers the game. And the actors voiced their characters so natural that you believe in their emotions, feelings, joy or sadness. And all this is heard by the slightest tone of voice.
The Dig - the brightest representative of the golden age of elite quests. It combines clever and complex plot, script, play on our feelings and emotions, excellent graphics and sound. Unfortunately, very few of these games, and now does not.
‹
›
Home
View web version