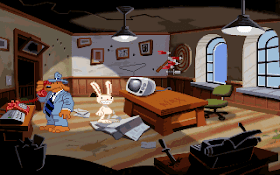 Genre: Adventure
Perspective: Side view
Visual: Fixed / Flip-screen
Gameplay: Graphic Adventure, Puzzle elements
Interface: Point and Select
Narrative: Comedy, Detective / Mystery
Published by: LucasArts Entertainment Company LLC
Developed by: LucasArts Entertainment Company LLC
Released: 1993
Platform: DOS
Click "Push Me" button in the middle of the screen.
"Sam and Max ..." without exaggeration, be called a phenomenon in the genre of "quest". Cartoon graphics in the style of "animated comic" different rare expressiveness and charm, the main characters only cute. The special charm of the game adds a few black and grim humor, but to fully appreciate it can only expert in the English language.
The main characters of the game, Sam and Max - a couple of private detectives "civilian police", they are investigating the abduction of a snow man out of the panopticon. Once these two were the most popular American comic book characters. Phlegmatic and good natured character of Sam's dog is very different from the unbridled temper and violent bloodthirsty rabbit Max, adoring, in his own words, "violence" * but together they complement each other - usually Sam "brains" and Max takes all the dirty work.
Control of the game implemented with a mouse, the cursor it looks different, it depends on the kind of the currently selected action. The command to perform this action is given by pressing the left mouse button.
There are five basic steps, search them by pressing the right mouse button:
- See (the mouse cursor in the form of the eye).
- Talk to (the mouse cursor in the form of the mouth).
- Take (the mouse cursor to the empty hand).
- Use (the mouse cursor to a hand with a rattle).
- To go (the mouse cursor to a hand with two fingers down).
Press both mouse buttons is rarely used, it allows you to back out of close-up mode "examining" anything to a normal game.
In the lower left corner of the box is drawn, it is - symbol of your property. When you press the left mouse button on a box appears on the screen a list of all your objects and actions.
To dispose of the actions of the rabbit Max, to make the mouse cursor appearance of the head of Max, for this you can "take" Max on the game screen, or call up a list of property and select the image of Max there.
Interesting feature of the game characters talk to each other. When Sam picks a conversation with someone at the bottom of the screen displays a list of topics selected by mouse click.
Four themes are always present:

question mark - ask a question.
exclamation mark - make a categorical statement.
duck - blurt out a deliberate stupidity.
hand with a red spot - to end the conversation.
In addition, the list of those shows images of objects or persons whom you wish to speak, select the desired image of your topics, and Sam clothe your desire into concrete words. Typically, this list appears after Sam wants about anything ask your interlocutor.
By moving the mouse cursor across the screen, he can change his appearance: opening or closing the eye, the hand with a rattle is compressed or decompressed, etc. This happens at the places where there are objects or items of significance to the plot. For example, opened his mouth says that at the moment you point to something that you can talk to.
When Sam decides to use his car in front of you there is an image map of the USA with the conventional signs of places you can go. New characters appear on the map as far as the investigation progresses. In the lower left corner there is a sign to the road, and if you go there, you will be able to get away and play some simple dynamic game. To pass the main game any value it has.
Talking about management, it is worth mentioning the key F1: pressing it causes the main menu. Here you can save your current game, load a previously saved or exit to DOS.
In the game there are a lot of funny moments, optional for its passage. Should not be limited to the minimum action - experimenting with everything that catches your eye, and enjoy the game only increase.
At the headquarters of Sam and Max's phone rings, which is where it all begins further adventures - a freak show some strange events occur. Two of the detectives assigned to investigate the case and to begin to get an official order from the courier waiting at the bottom.