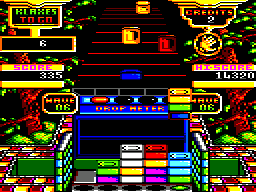 Genre: Action, PuzzlePerspective: Bird's-eye viewVisual: Fixed / flip-screenGameplay: Arcade, Falling block puzzlePublished by: Domark LimitedDeveloped by: Atari Games CorporationReleased: 1990Platform: Amstrad CPC
The game takes up the simplistic principle of Tetris by slightly adapting it as to form.
Various pieces are brought by a treadmill and the player has a pallet, as well as the possibility to accelerate (but not slow down) the movement of the carpet. The play is lost when the parts forming a stack reach the level of the pallet (the latter can not stack the pieces and deposit them on this column). To make the formed piles disappear, it is necessary to make more than 3 pieces of the same color. Originality of the system: the diagonals are taken into account, which opens up more possibilities than a simple rectilinear stacking. The progress is done by jerks, the player able to jump from level to level by five or ten.
‹
›
Home
View web version