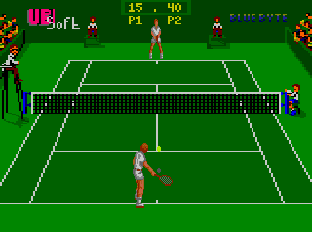 Genre: Action, Simulation, Sports
Perspective: Behind viewVisual: IsometricSport: TennisPublished by: Ubi Soft Entertainment SoftwareDeveloped by: Blue Byte Software GmbHReleased: 1989Platform: Amstrad CPC
One of the most famous and realistic old tennis simulators, approved by the champion of those times Jimmy Connors, after whom he was named; perhaps not the most graphically beautiful (although still very nice), but perhaps the most difficult in terms of gameplay.
Perhaps it is this game and more valuable in the first place - even to properly throw the ball, not to get them into the net, will have to work hard, to say nothing about what calculate the desired trajectory of the ball or catch the sly feeding their opponent. it's all about control features of the game: for the filing and you need to keep up with the three seconds to move the yellow X at a certain angle for a certain distance (this is the direction and force of impact), and the cross moves slowly, so I have n suffer.
As already mentioned, graphically the game looks pretty nice, you can even admire the animated stands, but the faces of the players are almost not drawn (but they themselves are drawn, and not bad, and their movements on the court are also good, except that sometimes too slowly ). Verdict - entertaining, but it is extremely difficult (at times up to irritation and despair) game designed just for the biggest fans of tennis computer, ready to spend hours mastering all its subtleties.
‹
›
Home
View web version