Indiana Jones and the Fate of Atlantis (DOS) 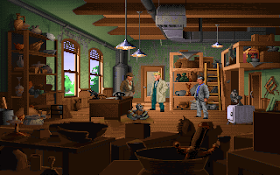 Genre: Adventure
Perspective: 3rd-person
Visual: 2D scrolling
Gameplay: Graphic Adventure, Puzzle elements
Interface: Point and Select
Setting: Fantasy, Interwar
Narrative: Detective / Mystery
Published by: Lucasfilm Games LLC
Developed by: Lucasfilm Games LLC
Released: 1992
Platform: DOS
The game provides the player with three different ways to complete the central part of the game: "the way wit " (intelligent problem solving) , " fist way " ( lighter puzzles and solving problems using fisticuffs ) and " command path " (the use of an assistant to solve many puzzles ) . Each path has unique items and locations , meetings and dialogues with various characters , as well as alternative solutions to advance the plot on the way to Atlantis. The player , who decided all the puzzles in all three directions , using all the alternative solutions (which requires several passages of the game) , gets the full 1,000 points Indy Quotient.

Indy goes to Monte Carlo and meets Trottier getting his business card. Then he goes to Algeria and card shows assistant Omar Al - Jabbar , but Indy still can not get an audience with the most Al- Jabbar . Assistant giving red fez Indie successfully followed him to the house of Al- Jabbar . Locking the master in his own closet , Indy " borrows " his card , several statues and a camel to get to the excavation site . Bribing German patrol figurines and scrounge direction of the nomads , Indy finds excavated and idol like the one who stole Kerner . He finds a note on the truck that says that the Nazis want to get something that has Trottier .
Indy returns to Monte Carlo , trying to warn Trottier plans Nazis. Unfortunately, it comes too late - the Nazis kidnap Trottier . Indy car pursues the Nazis and slams into her to save Trottier . He explains that he knows that the entrance to the lost city is located on Thera , and that he threw out of the car sun stone that he has not got the Germans. After searching the streets of Monte Carlo , Indy can not find the stone disc .
Indy arrives on Theroux and heads for the hills . He discovers a cave and uses Sunny stone inside to discover a stone figure . Indy also finds a note from Sofia which states that the Nazis stole it and took it to his submarine were to Crete . Exchanging stone pattern on the basket, picking up the network and using the documents to get a balloon , balloon tinkering Indy and puts him on the deck of a German submarine . It disables one of the lieutenants of the submarine and changes into his uniform . On board the ship , he steals the Moonstone and starts a fire in the aft torpedo room . Using fire to distract attention , Indy fired from the front torpedo launcher and hitting the shore , Lunar and Solar uses stones to open the entrance to the maze .
Inside, Indy finds a dead doctor and takes it Shternharta World stone. He finds a room with a map leading to the ancient underground station , which it activates using orichalcum . The train takes him directly to Atlantis. 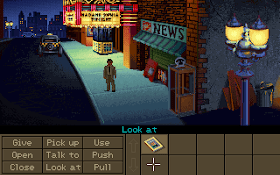 Indy goes to Monte Carlo and meets Trottier getting his business card. Then he goes to Algeria and makes Omar Al - Jabbar, a German soldier . Get a map and a camel from a grateful Omar , Indy gets to site where he finds sun stone . Having stolen a balloon in Nazi Indy flies to Crete on it .
In Crete , Indy should chart and discovers Moonstone . He uses both stone disk to open the entrance to the maze . Inside, Indy finds a corpse and takes it Shternharta World stone. Using brute force and your trusty whip , Indy sneaks in a few traps and German soldiers. He finds Sophia in the pit from which he rescues her . However , they exhibit a card room , from where they fall outward. Then they travel to Thera .
There , Indy and Sophia hired ship, and Indy dives into the water in search of underwater entrance to the lost city . But until it downstairs to the ship swims German submarine , and Kerner kidnaps Sofia and cuts air hose Indy, leaving him only 3 minutes of air. Indie time discovers the entrance to Atlantis.

Indy and Sophia sent to Monte Carlo and defraud his Trottier Sunstone before sent to Algeria, where they meet with Omar Al- Jabbar , the owner of the shop . Omar reveals that the Germans are digging in the desert somewhere . Indy steals travel balloon, but his German guard knocks on the excavations . There , Indy and Sophia discover mural which indicates that Knossovsky Palace is actually a colony of Atlantis .
On the ruins of Knossos , using " Hermocrates " Indy and Sophia dig hidden Moonstone . Using both drives they open the entrance to the maze . Finding the body of Dr. Shternharta , Indy grabs his World stone. After a long search , they get to the room with a card in which they find a detailed layout of Atlantis.
Meanwhile , the German submarine floats near the island , and the Nazis come in Labyrinth . They kidnap Sophia , but Indy manages to get to the submarine crew member and pretend . He quietly rescues Sophia and takes been stolen wheels . Then he manages to moor the submarine and underwater entrance to Atlantis.

After a long search and puzzles to rescue Sophia from his prison cell and getting to the second " ring " of the city , Indy discovers that all this time Sofieyu spirit led Nur- Ab- Sal through the medallion on her neck to regain his old kingdom. When Nur- Ab- Sal captures body Sofia , Indy grabs the necklace and throws it into the lava in the throne room of the god - king.
Indy and Sophia continue to move to the city center , is a huge room with lava and confusing ways. They manage to get to the center of the room. In Colossus , a huge device in the center of the capital, which gave the Atlantean god-like abilities, they grab Ubermann and Kerner . Kerner says that he is most worthy of those present for conversion to God. Using a tenfold error Plato Ubermann throws in car 1 orichalcum bead instead of 10 , turning into an ugly horned Kerner Shorty . Realizing what he had become , Kerner rushes into the lava . The Nazis then forced to become the next Indy guinea pig.
He manages to convince Ubermanna that if he becomes a god , they first taste of his anger . Deceit , Indy makes Ubermanna take experiment on himself . He throws the car 100 beads and transformed into a creature of energy , which then explodes , activating volcano sleeping millennia. While the city is crumbling around them , Indy and Sophia get to the submarine and resurfacing. Indy and Sophia are on the deck and watch as the city is sinking under the water at sunset.

If Indy failed to destroy the spirit of Nur- Ab- Sal or it does not relieve the Sophia from the clutches of the Nazis , instead Ubermanna last transformation takes Sofia / Nur- Ab- Sal . Sofia explodes, killing Ubermanna and Indy escapes one and why she thinks it is not obeyed .

Klaus Kerner - Nazi soldiers wishing to use the knowledge of Atlantis to the glory of the Third Reich.
Dr. Hans Ubermann - nuclear physicist from Germany who is obsessed with technology and Orichalcum of the Atlanteans.

Marcus Brody - a loyal friend and adviser to Indy.
Dr. Bjorn Heimdallr - archaeologist in Iceland. At the end of the game, found frozen.
Dr. Charles Shternhart - archaeologist who translated "Hermocrates" Plato. Is the caretaker of the temple in Tikal. Die of starvation in the Maze.
Felipe Costa - businessman and antiques information residing in the Azores.
Alain Trottier - a businessman and a trader from Monte Carlo.
Omar Al-Jabbar - merchant and businessman from Algeria.
Nur-Ab-Sal - dead leader ancient Atlanteans.

The gameplay is based on a system SCUMM (indicate the cursor and clicking on objects) developed by Arik Uilmanderom, Brad P. Taylor and Vince Lee, and popular in the 1980s and 1990s. The player explores a still scene, coming into contact with people and various objects using the computer mouse or keyboard to specify the action - "Mark", "Use" and "speak with."
At certain times, the player is given the possibility to use different modes in which there are a variety of puzzles and scenes:
The Team Path - Indiana Jones character accompanies Sophia Hapgood, which helps throughout the game.
The Wits Path - a large set of complex puzzles.
The Fists Path - mainly focused on action scenes and the corresponding path of the story.

Exit the game accompanied by unanimous approval. «Game Informer», «Computer Game Review», «Games Magazine» and «Game Players Magazine» called it the best adventure game of the year. Based on the six surveys, GameRankings rated the game at 90%.
It was sold about a million copies of the game on all platforms coming out and today is considered a classic of the genre.
In a review in the journal «Dragon Magazine» (room 193) was written that it was "one of the games that are must-buy" - the game was awarded 5 stars. In 2008, the magazine «Retro Gamer Magazine» Voted "narrative skill" in the game.