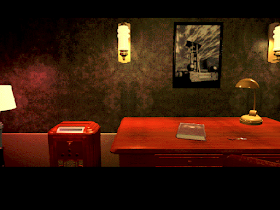 Born in 1960. In 1985 Shono formed the creative group Radical TV and in 1990 went solo, getting into everything from videos, high-definition TV and computer graphics to the total design of video games.

The CD- ROM “Alice” was launched in August 1991. In it Shono reconstructed the worlds of artist Kuniyoshi KANEKO and composer Kasuhiko KATO as an ‘interactive museum.’ It won the AVA Multimedia Grand Prix MITI Minister’s Prize for 1991. In March 1992 he released “L-ZONE” which was awarded the AVA prize that year for the best work in the multimedia division and which also went on to become a worldwide best-seller. For his achievements as a multimedia creator, Shono received the Multimedia Association Chairman’s Prize in 1992.
Shono no received his second AVA Grand Prix MITI Minister’s Prize for “GADGET” in November 1993. In 1994 the English version of “GADGET” was released in the US and Europe and received glowing recommendations in the review columns of “Macworld”, “Entertainment Weekly”, “USA Today”, and “Mac User”.
In March 1995, “Newsweek” named Shono one of 50 influential people to watch in cyberspace. The visual book “Inside Out with GADGET” appeared in December 1994. It contains 259 high-definition, full -color visuals in 228 pages and offers new and modified modeling data for sights and characters in the world of “GADGET”.
In may 1995 “GADGET Trips / Mindscapes” was released. A 79 - minute, all - cybergraphic movie available in both video and laser-disc versions, it features experiments on human subjects using Sensorama, the electromagnetic radiation device that plays a key role in “GADGET”.
In April 1997 “GADGET -Past as Future- (The Unabridged Version)” went on sale. Modeling for 90 percent of the objects has been further polished and all the movies and music have been redone. Shono’s newest project is tentatively scheduled for launching in spring 1998.

In the dark the air is heavy. The low, abrasive hum of a machine I sometimes hear coming from the room next door doesn’t bother me anymore.
I dress and go down at the appointed time to the lobby, suitcase in hand. Supreme Commander Slowslop, who’s sitting deep in a sofa off to the left of the entrance, glances at me and takes out a photograph.
“I want you to establish contact with Horselover”.
In the yellowing photo seven scientists stand shoulder to shoulder. Some of their faces I’ve seen before. Soon after the dictator Paulo Orlovsky took power, Army Intelligence became aware of certain activities of the scientists that they viewed with suspicion. Later, at the direction of my superiors, I came to this museum many
times in the pose of an ordinary citizen to learn what I could about them.
One day, as I was looking at an exhibit, George Tessera suddenly appeared behind me and said, “I’ve something I want to show you.”. At his direction I opened heavy red curtains to expose a strange machine unlike any I’d ever seen. Another man, fiftyish, who gave his name as Charles Reif, also stood by the machine. It seems the scientists had known for some time of our interest in them. I had a movie camera hidden on me and it vas still rolling at the end. When George switched on the machine it started up with a low hum As it began slowly to revolve, its lights blinking, an image of a huge vacuum tube formed in my mind. Light beams of different colors shone on the face of Charles. who had seated himself in the apparatus. Accompanied by a discordant noise the shafts of light came gradually into
phase and throbbed, then bore down on him in powerful waves. His cheek muscles quivered and his strength went out to his fingertips. His body shook violently. Then his head lolled and he went limp.

The strangeness of that sight,...I’ve never forgotten.

I suddenly g realized that I’d been standing there stupefied, staring at the photograph in mg hand. A great emptiness had opened in me. Feeling desolated, I picked up mg ticket and headed for the station.
From somewhere in the distance comes the sound of an eight-millimeter camera unwinding. Its grating whir echoes deep in my ears, waking half-forgotten memories.
Establish contact with Horselover.
An Army Intelligence agent departs West End Station. A news flash reports an approaching comet. Again and again a mysterious boy appears and disappears. A naked lightbulb swinging in a dim corridor, wreckage in forest and marsh, a huge flying object caught in the lens of a reflecting telescope. Is the gleaming bronze steam locomotive speeding toward the end? On the train, on station platforms, at the Museum of Science and the water tower you receive messages and pick up gadgets as you continue your search for the scientists. One after another, startling revelations. Sensorama, the electromagnetic-wave device that’s the key to it all. Memory and delusion, truth and
illusion, “Past as Future”...and at the end, what?

“GADGET”, which was produced in 1993 by the visual creator Haruhiko Shono, was an immediate, long-run hit. Its cinema-like atmosphere and structure gave it a look that far exceeded anything previously achieved by an interactive movie.
Behind the scenes with “GADGET - Past as Future - (The Unabridged Version)”
The 1993 edition of “GADGET” was produced in 8-bit sound with 256-color movies and graphics (system palette and gray scale). That represented peak performance for the production environment of its day. But machine power has increased and CD-ROMs are now capable of 32,000-color (16-bit) movies and graphics and high-quality (16-bit) sound. Now, on your monitor, you can experience for the first time the dense and totally convincing graphic texture that is Haruhiko Shono’s hallmark. A world of wonders awaits you.
‹
›
Home
View web version