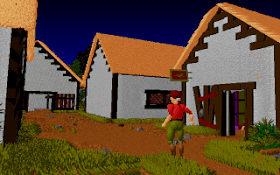 Genre: Action
Perspective: 3rd-person
Visual: Cinematic camera
Gameplay: Puzzle elements, Survival Horror
Setting: Fantasy
Published by: Psygnosis Limited
Developed by: Andrew Spencer Studios
Released: 1994
Platform: DOS
I began my journey in a good mood, racing on the lower earth (South, plain part of Scotland) and enjoying the solitude, relaxing under the hooves of my horse.
Finding a waterfall over a deep pond, I bathed and refreshed, and then stretched out in the midday sun to relax. Perhaps we are too slow to ...
Trying to make up for lost time, I strongly urged on his horse ... too hard, and rugged terrain with scorching heat collected its toll and the horse, and with a rider.
The journey through this part of the country - a dangerous occupation. The treacherous mountain paths constantly crossed, and many, even the more experienced riders, disappeared here. The sun was setting when we drove past the monastery. Twilight shadows enveloped us cold. In the deepening gloom, we were at the crossroads near the small village ...
I thought it was very timely. In the darkness, coming down to the ground, we were in need of water in the well.
The village was at a small bridge. Distance quite small, but as soon as I pulled up to the bridge, the atmosphere changed as quickly as the storm changes the weather summer days. I felt that something is wrong here.
All was quiet as the grave .... There were no children playing, no women, preparing dinner, or men, laughing and cracking jokes, returning from the tavern ...
What was wrong here?
Shop Right seemed safe enough, but for some reason its door ripped off its hinges, and what kind of dirty stripes on the walls?
Oh, God, what is it? ...
At the same time, we will suspend the authors and proceed directly to the story of one of the leaders in 1994 ar- Cadenet adventure-genre - «Psygnosis» company's game, which is called «Ecstatica».

Goal of the game

You find yourself in a village that seems abandoned. However, you will quickly make sure that the first impression may be quite misleading. Tirih village is under the influence of dark, supernatural forces, appearing in the guise of ghouls and demons.
Your survival depends on how soon you can understand why these terrible creatures appeared on the once peaceful streets. You must vacate Tirih from the wicked spell, or die trying.
Just start with the game options and character control.
At any time you can press the ESC, to enter the game menu with the following options:
START GAME (MALE) - start the game from the beginning, with the male hero-cause of;
START GAME (FEMALE) - start the game from the beginning, with the hero-ness women;
SAVE GAME - provide 10 files, one of which you can enter a name and save the game.
LOAD GAME - download one of ten previously deferred state.
SETTINGS - access to another menu, where:
- MUSIC - turn on / off the music;
- SPEECH AND SOWND FX - enable / disable it and sounds;
- SUBTITLES - turn on / off subtitles. (This option is required to activate. Not adding beauty in the picture, it will greatly help to deal with replicas of the characters. With their help, you can get very useful information, which eludes the ear of your attention.)

All movements in the game are carried out through the KEYPAD and remain unchanged throughout the action. Character can move forward in the direction of his glance pressing 8, despite what is shown in this view (that is, even though the character vdet screen inside or "outside" in the sense of you, or you).
1 - To raise / to put the subject of the left hand (you can only carry one item in each hand no backpacks and bags, unfortunately, no.).
3 - Raise / put thing right hand.
2 - Go back backing backs.
4 - Turn left,
b - Turn to the right.
5 - to dodge the blow in combat.
7 - Attack with the left hand or the object / weapon that is in it.
9 - Attack right hand or object / weapon.
8 - Go forward (face).
Character is determined to move forward buttons FI-F12. There are three modes:
FI-F4 - sneak (very useful to pass without a fight some enemies);
F5-F8 - walk at a normal pace (faster than sneaking, but also quite slow);
F9-F12 - run (well, to be on the lam from the troubles, but requires great care, because you can cater from the frying pan into the fire).
P - pauses the game. Return - by pressing.

A few tips on keeping fights

Now it remains for small - to sit down at the game and go through it to the end.
We sincerely wish you success.
Very much the villagers Tirih sorry. Though they did not speak in Russian, but still our brothers on reason. Help them please!
‹
›
Home
View web version