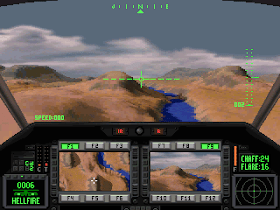 Genre: Action, Simulation
Perspective: 1st-person
Gameplay: Vehicular Combat Simulator
Vehicular: Helicopter
Published by: NovaLogic
Developed by: NovaLogic
Released: 1992
Platform: DOS
In the class of games, simulators have always been quite popular program simulating combat helicopters ("LHX", "Gunship", etc.). In all these programs, the schedule has been implemented on a vector principle, ie mountains, helicopters, tanks and even palm trees presented in the form of stacked each other polyhedra with only primitive coloring. Undoubtedly, realism is limping - still want to see the mountain looked like a mountain, but not as a regular pyramid is almost uniform color. In fairness, we note that the 286 clearly gives programmers sufficiently powerful technical means to implement something more spectacular. 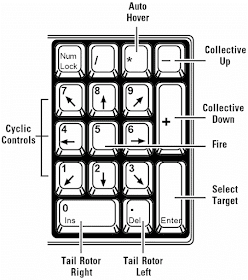 Therefore, the appearance of the game "Comanche: Maximum Overkill" caused among fans of flight simulators a storm. Graphics implemented processor i80386, and high memory requirements justified by 100%: landscapes, where the execution of combat missions helicopter "RAH-66" look very realistic, no polyhedra is not in sight, and smooth transitions of colors creates the illusion of presence . Another plus "Comanche" lay in the diversity of the environment: in the windshield of the helicopter extended the mining and volcanic landscape, the green hills of Latin America with the current between the two rivers, the phantasmagoric night landscapes, seen in night vision ...
However, the camp of fans fly immediately broke into enthusiastic supporters of "Comanche" and those who took the game more than cool. The main arguments "against":
- "Comanche" - it's not a simulator and dynamic shooter type "kill-all of them-". Control keys are not so many, and they are almost entirely to the choice of weapons and information displayed on the monitors in the cockpit. And if you can not change all the parameters of the helicopter, then it is not at all a simulator ...
- If you are very close to fly up to the mountain, its smooth coloring disintegrate into separate colored squares. As a rule, this was very close, and it was generally the last to have seen the player before his helicopter crashed into a mountain.
Indisputable is the one thing: the best way to make up their minds about "Comanche" - play it, so from the words down to business. So you have to go as a tactical helicopter pilot Boeing Sikorsky RAH-66 Comanche. You will carry out combat missions in a variety of climatic and geographical conditions and destroy the enemy outnumbering powerful weapons. In order to perform a task, you must set it to hit the target, in addition to do it for a limited time - the stock of fuel in a helicopter is limited!
Once you get to the main menu and choose the "Begin mission", you are asked to decide what to do, and select one of the two campaigns:
Comanche Training - set training tasks to not the most experienced pilots.
The enemies are not so aggressive, they are few - in general, the risk is not very high, but we can not relax. and w e '1'
Operation Maximim Overkill * Here in combat conditions to test their skills and their skills to counter superior enemy forces. Quests are much harder training.
When you specify the desired campaign, you can choose a task from the list. Note the different colors of tasks: blue marked assignments already completed by you (although no one will disturb you pass the same job again), green - the tasks that you can currently choose from, and dark orange - the job that you yet available (in order to be able to select them, you must first pass a simple task).
If you choose a task, you will be given a summary of what you have to do, then you can take a job or to look for something else.
We assume that you have finally found a worthy mission and your strength after a short wait were in the helicopter cockpit. In the left pane of glass is light velocity (speed), the right - height indicator. At the top is the compass for orientation in the field, and in the center - the attitude indicator, showing how your helicopter tilted to the side. In the cab, behind the windshield, has two monitor where auxiliary information is displayed to the right - the radar, and the left - the information about the current form of weaponry.
Here is a brief summary of the key with which you can control your helicopter:

These keys control the display of information to the two control monitors at the bottom of the screen. Since half the key is to the left of the monitor, and the other half - to the right, we will specify them through the sign "/" (eg, a record F1 / F7 means that this function is called the F1 key for the left monitor and the key F7 - to the right).
F1 / F7 - show on the screen map of the area in front of the helicopter. This map will be marked with white dots enemy bunkers, red - enemy helicopters, yellow - enemy tanks, rocket launchers and other land vehicles, and finally a green dot - your partner (if this task, it is). By the way, note that the blinking objects enemies - these are your immediate goals that you need to destroy in the job!
F2 / F8 - show on the monitor information from the radar; yellow dots on your radar - shells and rockets fired by the adversary,
Keep an eye on them and dodge in time to save combat capability of the helicopter before the end of the job!
F3 / F9 - the target image captured by the guidance system, or the view of the target with a camera mounted on a rocket fired by you.
F4 / F10 - the status of your job, that is, how many goals you need to hit in the job (Mission goals) and how much you still have (Remaining). The job will be done when you hit all the targets. Please note - not every combat unit is considered to be the enemy of the goal, but only those that are mentioned in the job! Sometimes the terrain and crawling with military equipment, and it is only necessary to destroy several cars, and once they are scored. After the completion of the task the helicopter automatically goes to the database and displays the information on the summary of the task - the percentage of the safety of the helicopter, the percentage of remaining fuel, etc. Out of reports and returns to the main menu, press Esc.
F5 / F11 - systems and equipment of the helicopter. Red flashing system, damaged during the fighting, and the consequences are severe damage - damage to the engine speed is lower, damage to the system aiming TAS makes you abandon the use of all weapons other than guns and rocket snarydov, etc.
F6 / F12 - only to go on to recall what function key than the controls. Appears on the monitor resembling a clue.
In addition to the function keys, you can control the information output to the monitor keys Q, W (left monitor) and the A, S (right monitor). This method allows you to sort through just modes displayed on the monitor instead of directly selecting them.
Also of note is the

Your helicopter is equipped with powerful weapons "that can successfully fight against overwhelming odds. Weapons, selected to date, shown on the display at the bottom left of the screen, the figure shows how many times you can still use this weapon. It's important to know against what purposes should be used in some kind of weapon, and not spend it in vain. Here are the keys that allow you to change the selected weapon:
Z - automatic gun. It can be used even when damaged the guidance system TAS, but of course you have to put things - electronics will not help. In addition, out of a cannon to shoot down the helicopter, you must show great skill - the goal does not stand still.
X - rockets. TAS for them, too, is not required. The most effective groups to engage ground targets; drawback - the lack of homing and
Small lethal force.
C - controlled powerful rockets "Hellfire". Almost perfect for the destruction of both ground and air targets, one missile is enough for any enemy. The drawback - the need to maintain a takeover target until the missile hits.
V - missiles "Stinger". Although this type of weapon mainly used to destroy air targets they can shoot and on the ground. Stinger, acquire a target, it follows her own and almost always hits her. Disadvantage - for ground targets Stinger'a one is missing, and so these missiles are used mainly to combat enemy helicopters,
In - call artillery fire on the armed forces of your target area. Be very careful not to gulp covered along with your helicopter and note - artillery opened fire immediately, but after some time. Mainly used artillery to destroy large groups of ground targets.
N - weapons of partner (in those jobs where it is). Your partner will fulfill the order, not particularly thinking about the fall or not, so before you order it to shoot at a target, verify that the goal of the team-mate is a "clean" line shots and missiles do not fall or get lost in the mountain.
M - immediately shot a pair of rockets (although selected may be quite different weapons).
[/] - A sequential scan of all weapons.
Enter - to capture a visible target for the use of any weapons induced. On the windshield acquired target is highlighted with a green frame. Also, by pressing this key, you can sort through the target and capture exactly the one you need.
Space - a shot from a gun. For automatic guns and rockets target acquisition is not necessary, in all other cases, no target lock you just wasting ammunition. Remember that, for example, Hellfire missiles you have not missed the purpose of referring to the moment of falling missiles (although in the case of loss goals you can still try to capture it again), and if you change the acquired target you press Enter, the missile will turn around and try to hit a new target.
In early 1994, "Comanche" entered the market in its full version. The amount of games increased 3 times! The major changes of the final version of "Comanche" from previous:
- Completely redone game scene and a review of the helicopter in the main menu, now everything is much more impressive.
- The number of military campaigns, increased from 2 to 10 ...! Accordingly, the number of combat missions also increased five times.
- Added new scenery - now, for example, you can fly to the snow-covered fields in Siberia, and even under snow while the visibility is very limited.
- New types of equipment and facilities of the enemy
- From snipers hiding in the trees, to the high-speed missile boats.
‹
›
Home
View web version