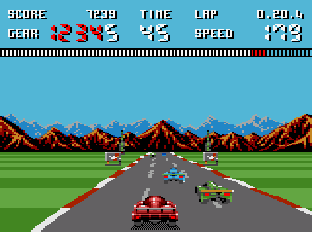 Genre: Racing / drivingPerspective: Behind viewGameplay: ArcadeVehicular: Automobile, Track racingPublished by: Amstrad plcDeveloped by: Ocean Software Ltd.Released: 1990Platform: Amstrad CPC
An arcade racing game with the prospect of a third-person review, coming out exclusively on the Amstrad CPC platform - and one of the few that was also intended to run on the GX4000 attached to this computer, which, alas, was almost useless to almost nobody. According to some sources, it is "inspired" by the famous 24-hour "endurance" racing competition (that is, long distances in order to test the "strength" of both cars and pilots), held in the French Le Mans since 1923.
About the gameplay, you can tell not so much. The choice of the machine is not provided; Before starting it is necessary to adjust the control and select a manual or automatic transmission. Before the admission to the "main part" qualification selection is carried out (in which the "protagonist" of the player for some reason is in an unequal position with the other participants - the latter you will see already on the track), on the results of which our position at the start of the actual competition depends. The race itself (where opponents will already appear to your eyes immediately) includes four runs on a circular route, each of which, in turn, is divided into four stages. There is a time limit - not very rigid, but still quite palpable. Car driving, of course, and can not be called realistic, although the same drifts on steep bends or even collisions with rivals or objects (billboards and trees on the sides of the road) are quite possible; Damage systems are not seen, however, "accidents" lead to loss of control over the machine for a few seconds (and even after landing on a solid surface it is not so easy to start immediately in the right direction), and the timer continues to tick. In other words, here there is a certain complexity and fascination - but nothing that is at all somewhat outstanding in the "essential" plane.
But what Burnin 'Rubber really impresses (of course, taking Amstrad's exclusivity into account) is, without exaggeration, a terrific graphics. Firstly, here are striking for their clarity landscape backgrounds; Secondly, a lot of unprecedented effects: from the dust from under the wheels during braking and drawing the side parts of the body when turning to the funniest animation "flips in the air" that the car makes during departures beyond the route or collision; In addition, races are held not only in the daytime, but also at night - and the "dark" stages look simply incredibly beautiful! You can even dare to say that visually this game is almost inferior to the famous Xyphoes Fantasy, but it came out a year earlier and has much more modest "appetites" in terms of system requirements. The verdict, in a word, is unassuming, but fun and healthy, so fans of old arcade races will surely be satisfied.
‹
›
Home
View web version