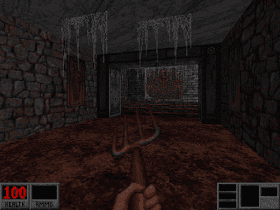 The game is «Blood» is set in the dark world (alternative history), similar to the U.S. in the early XX century ( in the sequel , Blood II: The Chosen. States in 1928 ) . The main character named Caleb falls in love with Ophelia . From her he learns about gaining strength religious cult Cabal, in which he takes with Ophelia later . Caleb , Ophelia , and two other cult worshiper , Gabriel (in the second part of the game - Gabriel ) and Ishmael are elected cult (The Chosen). However , after a while the dark deity Tchernobog worshiped by a cult, accused of treason and elected instructs his henchmen to kill them. But 20 years after his death, Caleb was raised in the form of walking dead . For twenty years, the cult of the Cabal has become much stronger, his followers ravaged the city , ruthlessly destroying other people, and designed to ruin filled cult undead, demons and other hostile creatures . In order to take revenge , Caleb finds and kills minions Tchernobog, who were instructed to kill a few. After killing the stone gargoyles , Caleb cremate the body Ophelia attached to the altar. Then , killing Shael ( giant spider , henchman Chernoboga ) and found the body of a spider in a cocoon Gabriel , Caleb decides to drink his blood , to take effect the fallen favorites. The same fate befalls the third servant and Tchernobog - the mighty Cerberus . When Caleb gets to the chambers of Tchernobog , Tchernobog exclaims that he deliberately revived Caleb , that he - in the way of his revenge , becoming stronger and having absorbed all the hate , finally brought him the ultimate sacrifice . Caleb newly resurrected killing henchmen and the Black - god . Tchernobog death does not lead to the disintegration of the cult , and only stops the spread of its influence. The game's plot is remarkable in that it does not have a classical point of view of positive characters . The protagonist Caleb ready to go over the bodies to complete his revenge and end the suffering in any way. Despite the fact that he is fighting against the forces of evil, it is characterized by brutality , lack of ethical and moral values, and he is a cannibal . Noteworthy is the cinematic scene at the end of the last episode , when a victorious Tchernobog Caleb fits one of the henchmen of worship and thanks him for saving from the tyrant . Caleb just did without thinking , shooting him in the face. One interpretation - "on each sheep - at the wolf " , that is , that those who worship and praising Tchernobog henchmen and were the cause of strengthening the latter. Each of the supplements contain a full episode with its own story . In Plasma Pak Caleb learns that the cult of the new trains to replace the elected traitors , finds and kills them . In Cryptic Passage Caleb looking for an ancient scroll to use it for their own purposes.

Unlike Duke Nukem 3D, the levels are associated sectors are located in nearly a full 3D environment ( engine partially redesigned for the opportunity to " stack " of the sector over each other ), but , monsters and other objects are also represented by sprites . Also , unlike Duke Nukem 3D, the game technology of voxels used for three-dimensional thereby are, for example , keys. Unlike DooM, the game implemented the ability to "fake " look up / down through the y-shearing ( moving the horizon line) . The standard for today's game management , which controls only the mouse turns the hero, and the movement is controlled with the keyboard, has already been implemented in both games , although it is not running by default ( in the same DooM was impossible to aim with the mouse up / down , but it can be controlled movement forward / backward).
Most weapons have an alternative way of shooting. The concept of the store (and recharge ) is absent , with the sole exception of crop for which the game keeps track of one or two trunks charged; recharge is made only after firing a second bullet. 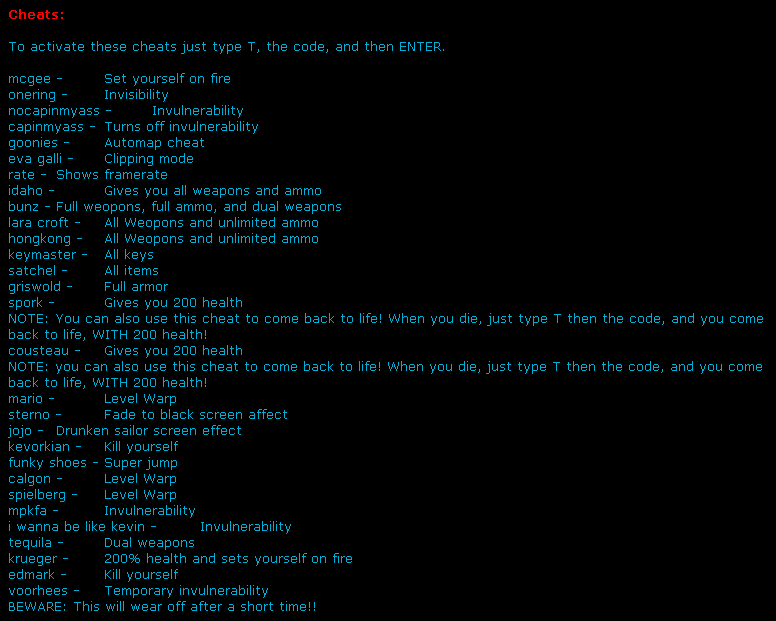