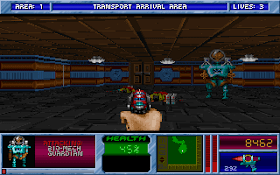 Genre: Action, FPS
Perspective: 1st-person
Gameplay: Shooter
Published by: Apogee Software
Developed by: JAM Productions
Released: 1994
Platform: DOS
The sequel of the computer game Blake Stone: Aliens of Gold, created by JAM Software and published by Apogee Software. In the game, new enemies, new weapons, and so on. N. In contrast to the previous section, the sequel is one episode and 24 levels.

The game takes place nine years after the events that occurred in the last part of the game Blake Stone: Aliens of Gold. British intelligence began investigating Dr. Goldfayera, but it was not found. And he started a new plan to take over the planet Earth, and for this he created his new mutants that were stronger than the 1 part. What can stop Goldfayera and his creation? Of course, Blake Stone.

In the game, new enemies, levels, power-ups and much more. Unlike the first part, in the sequel, instead of elevators player can move from one level to another using the teleport. However, as in the first part to teleport, you must find the key to it, and for this it is necessary to destroy the "security cube".

While playing, type "JAM" then hit ENTER. You will gain full life, ammo, access cards, and all guns but your score will drop to 0.
‹
›
Home
View web version