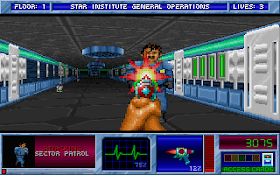 Genre: Action, FPS
Perspective: 1st-person
Gameplay: Shooter
Setting: Sci-fi / futuristic
Published by: Apogee Software
Developed by: JAM Productions
Released: 1993
Platform: DOS
When there was a game Wolf3D, many people can not stand up for weeks because of the computer, when there was DOOM, some fans just fell off their chairs. Blake Stone is not a milestone, but belongs to the same class as the above game, and it should be noted that the adventures of Blake and his fight with mutants quite fascinating.

The plot is based on the events of the distant future (2130-2140 years), where the brave Captain Blake Stone is captured by the aliens. He manages to escape, and he, after procuring a simple blaster begins worn on every corner in search of an exit. He was hindered to do a pack of bog slugs, robots, and other minions of the dead space of the totalitarian system led by Dr. Goldfayerom. The game is endowed with a good story, multiple difficulty levels and six missions. In addition, the gallant Captain Blake can master the 5 types of space weapons, a map of the area can be accessed by clicking «Tab». As the game better health to correct with the help of medical packages, unpretentious food, and fast food machines. In between gunfights nice chat with "good agents" disguised killer doctors. They know a lot of interesting and lend a couple of loans for health.

This window appears when you start the program and consists of the following:
NEW MISSION - to start a new mission.
ORDERING INFO - information for consumers.
INSTRUCTIONS - background information on the game.
STORY - a story about Blake Stone and how he came to such a life.
GAME OPTIONS - Installation of sound / SOUND, control unit / CONTROLS and size of the game screen / CHANGE VIEW.
HIGH SCORES - the best results achieved in the game.
LOAD MISSION - restore the recorded game.
SAVE MISSION - to record the current game.
BACK TO DEMO - return to the demonstration, if you played and came out in this menu, the position takes the form BACK TO MISSION, to return to the mission. •
LOGOFF - out of the game.

BEGINNING OF THE GAME

After clicking the NEW MISSION, you must choose the mission / MISSION, there are six levels of difficulty and / LEVEL, four of them. The smaller the number and complexity of the mission, the easier to play and, respectively, than they are, the more difficult to play.
After a short briefing and a pause operation appears pole.Chto important it is? The top line contains the name of the level ikolichestvo rest of his life, LIVES. Below are four windows, describe them from left to right: first - the information window, as it appears in the game background. Next, the health status of the window, with the percentage figure shows how much Blake still alive. The right window weapons more about it in Chapter WEAPON. Most left window - the window number of points and found the code card.

The movement back and forth is done by arrows up and down. Turns to right and left, respectively, right and left arrow. Ctrl - shooting from the weapon, Space - open doors and starts the apparatus for dispensing food, which recuperate. Q - turn 90 degrees to the left, W, or Enter - a sharp 180-degree turn and E - fast turn 90 degrees to the right.
Well, with the management of more or less figured out, and now run, shoot at anything that moves. On the floor lay a variety of useful things: such as medical supplies, ammunition, money for the machines with the food, but the most important thing is ...

There are five types of weapons, and they are switched by pressing the keys on the keyboard 1-5, They are:
- automatic pistol.
- Protective gun.
- Rapid-firing rifle.
- Double neutron annihilator.
- Plasma mortars.
Image weapons is in the appropriate box on the playing field, and the figure to the right it shows the number of remaining ammunition, and only an automatic pistol on the site is an indicator of readiness to fire when it is green - shoot can be red - you have to wait. This kind of weapon has no shortage of ammunition.
By the way, when some better weapons run out of ammunition, the weapon automatically switches to the more worse, but with ammunition, so that more economical fire.

While playing, type "JAM" then hit ENTER. You will gain full life, ammo, access cards, and all guns but your score will drop to 0.
‹
›
Home
View web version