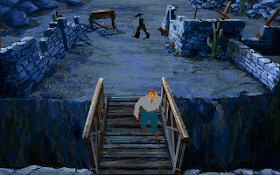 Jed Stone adventurer once dug up the graves of ancestors sacred Navajo and found a statue of an eagle of gold. To this place the crowd surged obsessed by greed people, and soon there arose a settlement. Its history began with a bloodbath between the Navajo and miners, in memory of her village called Slaughter Gulch (meaning "massacre"). There were rumors that the Navajo shaman cursed village and its inhabitants. Thriving place - there was a railway line in tunnels under the mountain miners were mining, and suddenly ... For no apparent reason Slaughter Gulch was thrown all its inhabitants and turned into a ghost town, which many in California.
Abandoned house in the 20's. nasheyu century attracted the attention of a film company. It was decided to make a film-western right in "natural settings." Send out in Slaughter Gulch crew did not return back anybody. Among the Missing - Emily Hartvud. Her old friend, a private investigator Carnby, goes to Slaughter Gulch to investigate (both hero familiar to experienced players «Alone in the Dark-1"), he still does not know that what happened is even more of a background than it looked from the first sight - his enemies are evil forces beyond human understanding ...

The first thing that catches your eye after you start the game - is its main menu with the following items:
- BEGIN A NEW GAME - start again;
- RESUME A SAVED GAME - restore previously saved game;
- DIFFICULTY LEVEL - the level of difficulty (it is recommended to choose EASY - because the difficulty only affects the activity of the enemies and your original health);
- RETURN TO DOS - out of the game in DOS.
After the game will be restored or re-started, it's time to control the actions of the detective Carnby. The arrow keys allow him to move from place to place, turn and even back to back away. If, instead of the usual one-touch "up arrow" quickly press twice and hold it, then run forward Carnby.
When the detective finds an object, it has two choices: take the item with you or leave it TAKE LEAVE. Carnby can carry an unlimited number of items, but in an extremely large property is rather difficult to navigate.
At any time during the game at Carnby has a desired action or thing; pressing the space bar will cause them to take advantage of it. To select an action or object, you must press ENTER, and then the screen will appear at the top of the vertical menu. The first item in it is always ACTIONS, that is to say "action" and is followed by a list of items. After the cursor to some position of the menu, pressing the right arrow leads you to clarify the menu at the bottom right (to get back out of it, use the left arrow).
Possible actions only three:
- FIGHT - fight. Pressing the space bar will translate Carnby in a fighting stance, and the arrow keys will allow strikes and kicks. Yet fist - not the best weapon, so it's worth as soon as possible to get something a gunshot;
- OPEN / SEARCH - open / view;
- PUSH - push.
When the cursor is on an item ACTIONS left, next to the "hard drive" in a figure indicates the current life Carnby. Specifying for each menu item depends on the item. Usually there are options:
- USE - to prepare the subject to use;
- DROP / PUT - drop / put.
Sometimes there are also additional items specific to the subject, say THROW - throw, and so on. If the selected item is a firearm, the left shows the number of charges to him.
Pressing ESC during the game brings up a menu system:
- RETURN TO GAME - back to the game;
- SAVE GAME - save the current state of the game;
- RESUME A SAVED GAME - restore previously saved game;
- DIFFICULTY LEVEL - to change the level of difficulty;
- MUSIC ON / OFF - turn on / off music;
- SOUND EFFECTS ON / OFF - turn on / off sound effects;
- DETAIL LEVEL HIGH / LOW - high / low quality graphic details;
INTERMEDIATE SEQUENCES ON / OFF - turn on / off the intermediate rollers; - QUIT - Quit the game.