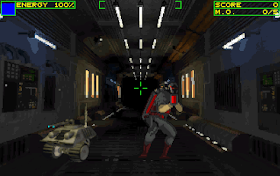 Genre: Action
Perspective: 1st-person
Art: Video backdrop
Gameplay: Rail Shooter
Setting: Sci-Fi / Futuristic
Published by: New World Computing
Developed by: Hypnotix
Released: 1995
Platform: DOS
If you are a fan of such mega-known games like Outlaw Golf or Deer Avenger, then most likely you know anything about Hypnotix. Personally for me the name of this company is associated with the Crusaders of Might and Magic, for which these guys were doing videos. Game is much more famous - after New World Computing - known firm in 1995 - is clearly on the rise ... So she decided to publish something such...
So, in the distant future in a galaxy is a war between the Federation and a certain variety, one must understand the invaders but the separatists. And everything was good, not suddenly run away from prison a special regime most dangerous criminal - the big shot, the famous scientist, who for many years was considered a ... dead. Prison guard killed off, and the escape of some of the agents involved Federation. It is clear that the solution of critical issues associated with dangerous jail inmates special treatment, should handle most important, dangerous and secret agent. The command said it was important that the scientist is not anything in the world, so we have to break the cake, but the bad guy in the back seat. According to intelligence on the planet Wetlands someone somewhere has landed, as well as the Federation expelled from there a year ago, you should check - if not our fugitive dumped on this planet is entirely covered with water?..

WetlandsNot that the plot somehow stands out from any other sci-fi games, but do not mention it simply can not, because there is nothing else in the Wetlands not. Almost. Video is not, very, very much. At the moment there are several minutes of gameplay once cinematics, which personally I tend to be associated with the western fiction film production average.
Wetlands"Fantastic" graphics at the first examination it appears pre-recorded video, which in the same place at exactly the appointed time, there is one and the same enemy. I mean, the game - a virtual shooting range, and therefore is somehow not on itself: Wetlands was released only on a PC that is not very good for games of the early 90's. Because good games then constantly wandered from platform to platform. Well, okay.
"In space, and under water, all waiting for you in big trouble" - reads the next pirate wisdom with album covers Wetlands. "Border", which fly above wetlands in space, without warning firing on us, the police run us through the narrow corridor (or rather runs to meet), well, what's going on under the water ... you can not dodge the shots - either you have it or he you, and if it is you, and you - it is the only thing you can count on is extra points at the end of the level. No kits, the only way to vary the gameplay - recharge queue at enemies. "Watch" is quickly over, and that means that once again have to switch to single shot.
"... Please be a backup mouse, say, for some reason they do not like the" country of rain. " True. Truth is, you could say. Even better would be to get the joystick. You can judge this by the levels where we have to watch the action from a third-person (or more precisely - top-down), and in this case, the mouse control is very difficult.

Music in the game is, but some ... forgettable. The plot is unoriginal, and the graphics - not particularly outstanding. However, to find out what's all going to end very, very desirable, but why - is unclear. Kind of like shooting at a police officer in the corridors, shoot down the space station and get a torpedo in some "vents" on the submarine bases separately as a not very interesting, but all at once produces a very favorable impression. It is surprising, to be honest.
Who can recommend these things fun? Well, most likely, only hardcore oldgeymeram (oh, what a phrase is!) Who are interested in everything that happened in the last century, and which will not spare the time to search for and jump (to buy this game, in my opinion, is not possible: Even the ratings game in German magazines in year Wetlands - around 78% - do not have to be confusing - not a masterpiece, and hence on the shelves of European stores do not find it now) is very mediocre and not particularly outstanding game.
‹
›
Home
View web version