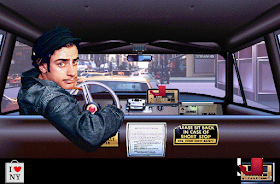 Genre: Adventure
Perspective: 1st-person
Published by: Time Warner Interactive Group Inc.
Developed by: Digital Fusion
Released: 1993
Platform: Windows 3.x (Win3.x)
The plot and the main line of the game's story is a very interesting and promising. The hero arrives in New York, he had to move from one aircraft to another, to which there are still two hours. In general, do nothing. There is just under the arm catches a cab driver Paul, who offers to make a little trip around the city of skyscrapers. Well, the hero and makes him so taxi is not exactly a taxi.
After a short ride in the car slows Paul skyscraper Empire, State Building, said that the journey is over, it's time to pay the headstock, and wild twists price for the ride. We have no money. Paul, of course, not happy, but proposed transaction. He sold his soul to the devil and now earns his horns, fusing Lucifer new innocent people. We should become his next victim and go to fight them with cooked tests.

and if we fail to act and speak according to the laws svego and goodness, our soul will turn black while not fly into Hell.
The tests lie ahead in the three layers of time: according to the box game - in the Jurassic period of the dinosaurs at the time of the Roman gladiators in the arena and, finally, in the trenches of France during World War II. After all these horrors we still have to go, "an apocalyptic New York City"
corrupted by Satan, and bring it back to its former state.
Imagine what could be done in such an idea, let us take for her performance company like Sierra or MicroProse! But, apparently, Pip Moreno did not have time to think of anything except the main canvas, as his wife came on the television began to show a baseball game and called his aunt from Dortmund with a three-hour conversation about his Bobik. In general, the best illustration may serve as a description of the actions required to pass one of the three stages - Jurassic. So, being in the jungle, we make two steps forward, look to the left, take the money from the machine using their credit cards, we go back three steps, we enter the cave and poke three times the cursor in its corner. Everything. I wonder? 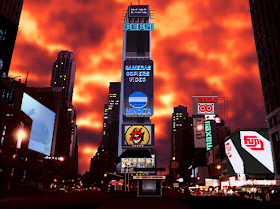 Of course, if you are playing for the first time, do not immediately find a machine with money in and out. However, there is not too much, go away, just look at a couple of wandering listlessly dinosaurs, so it's three minutes to go through this "stage" is quite possible.
Other times on the logical depth did not wiser, though, there are some elements of arcade, pretty unnerving because they are poorly made.
In France, for example, the trenches roam the Germans in gas masks and weapons to fight with them, you do not.
But you can either run run to the headquarters, it's ten steps, or die, lose one of three lives, get in a hell of a reception room and go there right in satanic garage where Paul is a taxi with the Roman weapons in the trunk. By the way, in France, there are two more opportunities to shoot, but they only bate you a "spiritual glasses", and no use of them.
Roman arcades on my nerves because of errors. There are two possibilities - either beat Gladiator or fight with mechanical mockery. The first path will lead you either to the loss of half of the soul, or to cutting down the game with the words "Movie '123 'not found". If the fight mechanics, the program will not be completely stable to understand a single mouse click, and it will take a two-fold over twice. So you're constantly hitting the obstacle is not their fault. 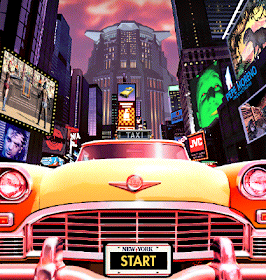 To complete the game before the end of the time you do not have to deal with its arcade fenyami. The fact is that during each of your campaigns running counter in the car fields and on your return, he would demand money. The maximum that can be spent during the campaign - $ 100, from the first time that can not be done, if only because it is hard to believe that everything is so simple and fast, and I want to find some hidden feature or a door that is not here. But then you get to the end of the game and hang because not be able to safely get to the house, if you do not pay the "service" taxi driver.
Personally, I was scared to go through all this crap for a second time, so I just broke
saved game. But then I got into the promised "an apocalyptic New York City," as was the pure soul. I had to break it all over again, spending another hour. And in the end it turned out that the whole "apocalypse" is reddened palette and we already know the Germans in the corridors of ESB. According to how to return all back to normal, there is a whole bunch of tips for stupid.
How can this be, since the only "mystery" in the game ...
In general, people are so enthusiastic about the creation of graphics and unnecessary videopribambasov that have completely forgotten about the plot. Most of the game you will spend in the ESB, where you will be naive to try to find some clues, riddles and clues to future adventures. Ha! You can only just wander around. The hall has twelve (!) Tele-f tensors, each of which can be viewed 4 filmik approximately one minute without having absolutely nothing to do with the game. You can also go up the elevator to the roof and from there to survey the types of binoculars in New York on all four sides. Too, just like that, though, the truth, one of the tips in the "apocalypse" will be visible here.
‹
›
Home
View web version