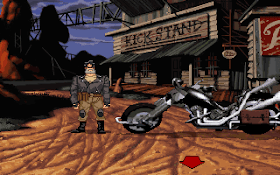 Genre: Adventure
Perspective: 3rd-person
Gameplay: Graphic Adventure, Puzzle elements
Interface: Point and Select
Published by: Brasoft Produtos de Informática Ltda.
Developed by: LucasArts Entertainment Company LLC
Released: 1995
Platform: DOS
This masterpiece is a very long time occupied the first place in the various charts. The guys from Lucas Arts, created such famous hits as Sam & Max Hit the Road, Maniac Mansion 2: Day of the Tentacle, and in this case did their best. Here is the result of their work - Full Throttle.
Nice graphics, great sound, great story - a seat to the monitor and see for yourself.
The F1 key is the main menu of the game, where:
- LOAD - load the game;
- SAVE - save the current position;
- PLAY - start a new game;
- QUIT - exit to DOS.
In this menu, you can also enable / disable the accompanying music and titles.
In «Full Throttle» you are the Ben, the leader of one of the strongest gang rockers POLE CATS.
Ben looks like it should look like any self-respecting rocker: leather jacket, a wide leather belt and a two-day stubble (very fashionable for Americans) - these are the signs by which you can easily recognize your hero. All control of the game is most convenient to carry out with the mouse. However, if for any reason you are not satisfied, the aid comes easily and the keyboard.

If you want to work on a game object or another actor, move your cursor over the form of the cross. Crosshairs should appear around red frame. Click the left mouse button, and you will see a menu (if it does not appear, you can throw your mouse):
- HAND - take an object to hit another character, and so on ...;
- Leg - kick the object (very useful for vyshibaniem doors);
- ROTH - talk to other actors play;
- EYES - consider the subject closer.
So, let's start ...