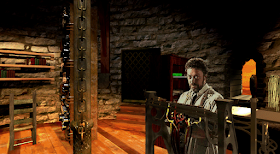 Genre: Adventure
Perspective: 1st-person
Gameplay: Puzzle elements
Art: Full Motion Video (FMV)
Narrative: Horror
Published by: Interplay Entertainment Corp.
Developed by: Amazing Media
Released: 1995
Platforms: Windows 3.x (Win3.x), SEGA Saturn
In inclement stormy night a sudden and sharp knock at the door was a harbinger of trouble and coming nightmare. The verdict was read out dry and short. The alleged killer of his daughter and the originator of children disappearances in the area at the time could not admit and thoughts that his last breath life will not end - contrary to common sense, it will start again, but would be completely different ... The last thing that remains in the memory of the condemned, - the angry shouts of the assembled crowd, greedy for such spectacles, and roughly thrown a rope around his neck. Then there was silence. The execution took place ...
That night, woke up in a strange creature of the old castle laboratory. It remembered the time of his death, but his recollections resembles a mosaic image crumbled. So many questions and so few answers. The picture slowly began to take the integrity as the creature remembered his name - Philip Verre, executed murderer who were forcibly returned to the living world as a result of unprecedented and difficult experiment, he at the same time a prisoner possessed Frankenstein science, its creator. And now its main purpose will be escape from the castle to save the newfound life. To prove his innocence. And I understand what he became.
Became widely known novel by Mary Shelley's "Frankenstein" written by her in a fairly young age and anonymously published some time later in London (1818.), Was an inexhaustible source of inspiration for a number of adaptations and later could not but attract the attention of the gaming industry . However, many interpretations of the novel to the screen rarely followed his story line - one of the directors sought to give the monster certain traits consistent with their ideas: often created Frankenstein monster on the screen turned on their light hand in a hard killer with the mind nesmyshlenogo child and uncertain motives for the murder, some also tried to see the humanity of "birth" of the monster and to justify the atrocities committed by them.
"... Now that I've finished his work, the beauty of the dream vanished, and my heart was filled with unspeakable horror and disgust. Unable to bear the sight of his creation, I rushed out of the room ..."
In the book of Mary Shelley's monster and his creator - two infinitely unhappy and suffering beings. Victor, abandoning his demonic creation, thus signed a death sentence to their loved ones, which is infinitely loved - and the realization that he has produced in the world is real evil in a fit of youthful ambition and lust for forbidden knowledge will eventually turn it into a shadow of itself old, possessed only one desire - to avenge. The monster, which turned away from the world and even its creator, will kill, yet will not take a Frankenstein all that he holds dear, while experiencing ever-increasing sense of guilt and despair. And seemingly endless persecution will end only with the death of one of them - despite the fact that they hate each other to death, the death of an enemy thrust on the edge of a precipice and the other - in fact the last goal in life has become unnecessary is reached. 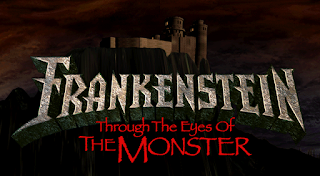 "... My hatred of the monster can not be described. The thought of it, I gnashed his teeth, my eyes were burning, and I longed to take his life, which gave him so thoughtlessly ... I climbed to the highest peak of the Andes, if he could overthrow it out ... "
To say that Frankenstein: Through the Eyes of the Monster, released in 1995, is based on the gothic novel by Mary Shelley, it would be unfair to the novel - almost the whole game plot is the result of the free fantasy authors borrowed from books only the names and total narrative idea. In contrast to the suffering of Victor Frankenstein in the book are Dr. (its role played by Tim Curry) - the real evil genius who is not tormented by remorse and in the name of science is able to sacrifice anyone. Back at the castle, once owned by his family, Frankenstein has equipped it under laboratory for forbidden experiments connected with the revival of the dead tissues of different creatures.
"... No mummy returned to life could not be worse than this monster ..."
Philip, his "ward" is, and looks like a monster (though his face we never show - and you need it?), But at heart he was and remains a man - unjustly accused, aware of his present position, Man, Isle of mind which certainly will penetrate into the details of their own recovery. Gradually Frankenstein begins to feel threatened by the overly curious and despising his being and the creator and his creation immediately become enemies.
Dating back to the genre of interactive movie, a lot of video game does not spoil. Video here - part of the game, support the various actions and dialogues. Although the dialogues in which the player could participate directly as such either, - conversations between characters begin automatically at the meeting and a choice of questions or answers are not provided. Actions of the characters in the game a little bit, and chance meetings with some of them able to produce enough strange impression. Loneliness shadow follows the main character, the feeling is fully supported by strolling along the endless corridors, secret passages and abandoned mines that have long not been marked by the presence of man, and most of the action on the game scenario is carried out in secret from the doctor.
Being found here and there, records and diaries talk about criminal acts Frankenstein and called the names of his accomplices, Share Description cruel experiments on the recovery, which will in the final to give quite a definite answer to the question: "Which of these two big monster - Philippe or Dr. Frankenstein who dared to defy the Creator himself, the poor man returned to life? ".
"You will soon wake up from the nightmare called" death "..."
This quest may seem rather complicated for beginners of the genre - even puzzles that lead to despair inexperienced players, not here, but most of the detected objects is being used in a number of locations. The game fully complexity are present other species. One of them - is the presence of labyrinths. The castle transitions seemingly endless; doors of rooms, looking identical and most of them locked - find unaccustomed required initially is problematic; visually indistinguishable from one another gloomy secret passages; underground tunnels, illuminated by the dim light of torches and similar to each other like twins; park in front of the castle, surrounded decorative green fence, which can be quite a long walk in a circle ... You can enumerate a long time, but to some confusion movements imperceptibly accustomed, unless, of course, patience is not denied before. A long, almost sleepy study under lock mournful music, against which surround sounds seem perhaps too harsh, sometimes aborts any important event, and it was already dozing players rush in unraveling the intrigues with renewed vigor.
The second problem - the puzzle in the spirit of the famous Myst with electricity, levers and strange mechanisms. Because often have to wander from one location to another at a considerable distance through the path-maze, the direction of travel is recommended to record. Or often remain on those cases, if you suddenly get lost and walk around. In addition, we often need to perform a sequence of actions in order to, for example, do not die a second time ... gaming mouse also generous with tips - to identify who undertake the subject or, for example, a retractable drawer, sometimes have to call on all their care. Complex and very final - your wrong actions certainly will lead to a sad ending. As soon as the patience and persistence will allow this story to end on a happy note. This game - a kind of test for fans of the genre, check perseverance and ingenuity. Yes, and who promised it would be easy? Is it easy to look at the world through the eyes of a monster, which is so wanted to stay human?