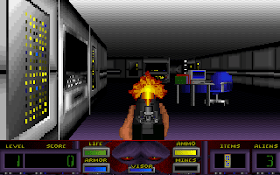 In 2012, the expedition set off to Mars and brought out a mysterious artifact. He was sent to investigate, but a few started terrible. Artifact strangely opened a portal and there were monsters that terrorized the lab "Corridor № 7" and blocked the entrance to the artifact. So brave soldier - you have been entrusted with the task: clean floors lab and close the portal.

The gameplay is based on the engine, Wolfenstein 3D, despite the fact that this year the Doom engine almost overtook him. The game is not divided into episodes. Instead, it contains 30 levels (in the version CD-40), except 6 loyalty.
Unlike other first-person shooter, which necessarily kill all the enemies in Corridor 7 is necessary to completely clear the level of monsters, and then go back to the elevator, which contains a single entry and exit level. The game is no different bonuses, but you can earn points killing enemies. Also in the game you can find the cartridge dispensers, and lives in the walls of reservation; rooms in which you can improve your health; as well as computers that allows you to unlock the door ("red" and "blue"). To examine the floor, you can find a map of the level. 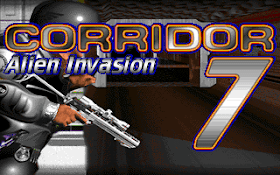 After the release of the game Corridor 7: Alien Invasion, Capstone Software company planned to create a sequel Corridor 8: Galactic Wars. Development was unsuccessful, and the project was canceled. But in 2005, the Forest Bird implemented a prototype and source code for the fans Corridor 7, which are posted on the website for downloading freeware.
Hold W + A + X to receive all weapons, full life, and proximity mines.
‹
›
Home
View web version