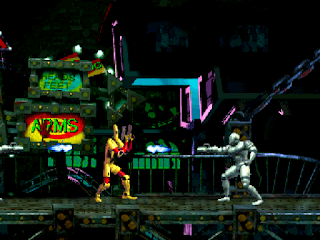 Genre: Action
Perspective: 1st-person, Side view
Gameplay: Shooter
Setting: Sci-fi / futuristic
Published by: SegaSoft
Developed by: Syrox Developments
Released: 1997
Platform: SEGA Saturn
You play the game as Scud, a "disposable assassin", who has been hired to take out a target in the "Marvin's Manikan" factory. Based on the underground comic by Rob Schrab, Scuds are designed to self destruct after they have destroyed their target... Scud has become aware of this fact, and instead only injures his target enough to not self-destruct. But, being a robot, Scud has no money, and must turn to freelance jobs to pay for his original target's life support. The game can be played with either a controller or the Virtua Stunner (or other compatible light gun). With a controller, the game is a side scrolling shoot-em-up; but with a light gun, it becomes a first person shooter. You can play with any combination of controllers and guns, but the game is essentially meant to be played with two guns (Scud himself uses two guns).
‹
›
Home
View web version