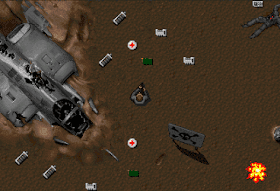 Genre: Action
Perspective: Top-down
Visual: 2D scrolling
Gameplay: Shooter
Setting: Sci-Fi / Futuristic
Published by: Team 17 Software Limited
Developed by: Team 17 Software Limited
Released: 1994
Platform: DOS
Tower Assault is the third episode of Alien Breed. This is an action game view from above, which has a two player mode in cooperation. It takes place in a science fiction universe of horror: the player is a Space Marine confronted with hostile alien creatures confined in the mazes of a space colony.

When the mining colony of Azarin 2E launched unremitting distress signals, it took several weeks to reach the battleship Herona planet. Vessel formation fielded was decimated by the defense systems of military research center. The agents of the single crew rescued, Jordan and Nash, receive a mission to infiltrate the giant towers of the base and to initiate the self-destruct procedure ...

The team of ABTA

The game this time programmed by Stefan Boberg, (indeed, the previous programmers are credited in the game manual for the concept, they have not worked on this aspect). the graphics are the work of a 16 year old at the time of the release of the game, named Tony Senghore. Allister Brimble is again at the controls for music and its part of the game. His mother, Lynette Reade, she took care of the female voice of the game, just like the previous parts of the game, and John took care Allardice it 3D graphics.

The game engine is an improved version and replay one that was used in Alien Breed II: The Horror Continues. One of the most important changes is the establishment of several outputs for each level, which makes ABTA much less linear than its predecessors. The text on the back of the box indicates that there is over 276 different ways to finish the game.

Other enhancements include a mode 'Retreat', it allows the player to fire his weapon and backward at the same time, but at reduced speed.

There are differences between the versions of the game that came out on the main formats of the time.
The ECS version in 32 colors, 128 colors AGA version and the PC version in 256 colors.

Concerning the Amiga version, if extracted and decompresses all files in the play of the disk images, it is over 20MB. Alien Breed: Tower Assault is a huge game in terms of program size (as well as playing surface to go).
The game automatically recognizes the presence of the AGA chipset, and takes into account, producing more sounds and displaying improved graphics on the Amiga 1200 and 4000. 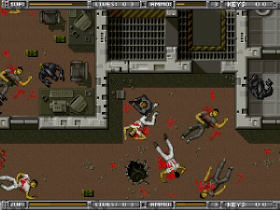 The Amiga version is the first release, and the game is over three disks DD 3.5 "protected in its original version (Floppy disks are protected by Rob Northen Protected DOS format each diskette uses long tracks composed of 12 sectors per track, which offers a higher capacity of 980 KB per disk). The pirated version is the standard AmigaDOS format and it takes 4 disks instead of 3.
It is also noted that, once installed on the hard drive, whether in ECS or AGA version executable file each version check if the game is launched from a hard disk or from floppy disks. If they detect the launch of the game from a hard disk, then the disk '1' original is required for verification of the key RN PDOS format.
There are two revisions of the program, version 1.0, and the latest, 1.1 (the indication is given on the original boot disk 1 block). The game requires 1MB of RAM minimum on A500.
The game was preserved by Softpres (or SPS for short) under the number 0279 for version 1.0, and 2331 for version 1.1.
The music of the ending sequence is completely buggy on the ECS version of the game, and this on the 2 revisions of the software. This is a programming bug because the file is intact and positioned as the first file on the floppy disk 2. The AGA version does not have this problem.

This version of the game was released on a single CD-ROM, which contains the entire game, before which a long introductory FMV sequence is played, which was quite unusual for the time. The full version of the game Alien Breed II: The Horror Continues in AGA version is also on the CD.

Tower Assault The game was released in two versions to PC: a floppy disk version and a CD-ROM version. They were converted by East Point Software development company.
The PC CD-ROM version was released in early 1995 and is identical to the Amiga version.
Note also that the PC version, floppy and CD-ROM is the only one with all the game files in good condition.
The PC version requires at least a 25-I386 SX PC with 500kb of conventional memory, a graphics card VGA / SVGA, 2MB of RAM EMS / XMS; Ideally, the game will run best on a configuration PC I386 DX-33 with a Soundblaster card or Gravis Ultrasound, see the PC Speaker, and a joystick.
The game is not physically protected as amiga version, but it uses a protection code booklet, printed on a black background, to prevent their copying.
The CD-ROM version is strictly identical to the CD32 version and contains the FMV sequences. The only notable difference is the absence of Alien Breed II game, the latter never having been converted on PC, and it is absent from the CD-ROM directory, although it is mentioned its presence on the box.