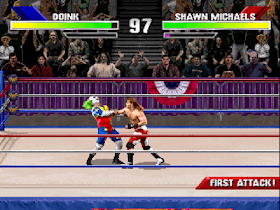 Genre: Action, Sports
Perspective: Side view
Visual: 2D scrolling
Gameplay: Arcade
Sports: Wrestling
Published by: Acclaim Entertainment
Developed by: Midway Manufacturing Company
Released: 1995
Platforms: PlayStation (PSX, PS1), SEGA Genesis / Mega Drive, Super Nintendo (SNES), SEGA 32X, Arcade Machine
Today we will talk about a game that was released back in 1995 on a arcade machine. The game immediately fell in love with gamers, and in the same year it was ported to several gaming platforms. The name of this game is WWF WrestleMania: The Arcade Game. We will be looking at the Sega Genesis version. The differences with other consoles are not that great and only concern graphical changes. First of all, looking at the name of the game, you can guess that this is far from a wrestling simulator. The word “Arcade” in the title speaks for itself. You won't be here slowly fingering the keys to do some Double Supplex. You do not need to know the rules of wrestling, you do not need to achieve victory one-two-three. All you need for this game is nimble and fast fingers, a little luck and drive. In general, let's stop talking in riddles and get to the gameplay. This is arcade wrestling where absolutely everything is allowed for you! Hit the enemy in the head with a hammer, fire a projectile of electricity at him, hit him in the kidneys with a baseball bat, throw powder in the eyes, send demons to the foe, etc. etc. Add to all this beautiful combos. Do you feel what it smells like? Yes, yes ... Mortal Kombat! In the game, you are offered a choice of 8 wrestlers who actually existed at that time. These are Doink The Clown, Razor Ramon, Shawn Michaels, Bret Hart, Bam Bam Bigelow, The Undertaker, Lex Luger, Yokozuna. Those who are fond of this show know that some wrestlers still show off in the ring to this day. The characters themselves are very colorful, which is only one Yokozuna.
The game has 2 game modes: Intercontinental World Championship and World Wrestling Federation Championship. The first mode offers to fight for the title of intercontinental champion, where on the way you have to fight several battles, such as 1 on 1, 1 against 2 and ... (Oh, God!) 1 against 3 opponents. A sight still! The second mode, as you understand, is the fight for the title of champion of the Wrestling Federation. It will be more difficult here, and in the very first battles you will have to fight against two opponents. Of course, the game was not deprived of the opportunity to play together. It's so much more fun.
Let's take a look at the options ... In the game you can choose several difficulty levels, ranging from Very Easy to Very Hard. You can turn on / off music, change the level of life stripe, well, that's it, little things.
We will now touch on the graphical side of WWF WrestleMania: The Arcade Game. There are no particular complaints, the graphics are beautiful. Juicy colors, great animation. At times, it seems like the movements were digitized by professional actors, just like in the case of Mortal Kombat. The wrestler figures themselves are made at a high level, each one looks like its real prototype. There is nothing more to say, the graphics look great for the old lady Mega Drive.
Sound. And here the developers did not disappoint. The quality of the music is at a high level. Each wrestler has his own individual, real-life music. The wrestlers themselves scream like mad when they are mutuzed. Commentators shout phrases that add adrenaline and drive. They also announce the names of the wrestlers before the fight. Moreover, the voice acting of the comment was performed by none other than Vince McMahon and Jerry Lawler. It is worth noting that Mr. McMahon himself is the owner of the Wrestling Federation.
Let's say briefly and clearly about management. If you were good at using the gamepad / keyboard in Mortal Kombat, then here you will not have any problems. Various set of strokes from a small combination of buttons. Beauty! If you can't perform any combo hit, you don't have to break your fingers and poke at 20 buttons at the same time. Mastery will come with time.
Verdict: What do we have? An excellent fighting game from the studio we know. It will appeal to both Mortal Kombat fans and casual gamers. Recommended for absolutely everyone. If you consider yourself a hardcore gamer and respect the Sega Genesis, then this cartridge / rum should be on your TOP list. Adrenaline, drive, emotion - if you lack this, play this game.

At the character selection screen, hold L1 + R2, then press Up, Down, Up, Down, Square, Triangle, Right, Left.

At the character selection screen, hold L1 + R2, then press Square, X, Circle, Triangle. If you entered the code correctly, the word "Combo" will appear under your player. Then the combo meter will automatically refill.

Pause the game and press X, Triangle, R2, Up.

Pause the game and press X, Triangle, R2, Up.

At the character selection screen, hold Up and press Start.

Pause the game and press X, Triangle, L2, Down.