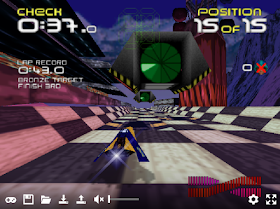 Genre: Action, Racing / driving
Perspective: 1st-person, Behind view
Vehicular: Hovercraft, Track racing
Setting: Sci-fi / futuristic
Published by: Midway Home Entertainment
Developed by: Psygnosis Limited
Released: 1998
Platform: Nintendo 64 (N64)
Established in 2098, just one year after Wipeout 2097, Wipeout 64 introduced several elements to the Wipeout series: analog control was adopted (thanks to the Nintendo 64's analog stick), a split-screen multiplayer mode made its first appearance, at the same as the Challenge Mode - where the player has to complete a set of challenges in the predefined classes and tracks: getting the best time (Time trial), the highest position (Race) or eliminating most of the opponents (Weapon).

Most aspects of the game did not differ from the previous two titles. Wipeout is based on a futuristic anti-gravity setup where pilots would compete against each other or computer controlled AI opponents to finish in the highest possible position. The Wipeout gameplay is inspired by the parallels of Formula 1; Rather than using aerodynamics to increase wheel grip by downward force for faster turning speeds, Wipeout uses a fictional method of air braking to achieve even greater turning force.
Wipeout 64 offers most of the same features as Wipeout 2097, along with unique new weapons for each team. New additions to the weapons interface include the ability to fire three rockets at once and rear lock missiles. Returning weapons include homing missiles, machine guns, and plasma bolts. Exclusive to Wipeout 64 is an unlockable weapon enhancer called "Cyclone" that allows the player to strengthen the power of their weapons.1 There is also the inclusion of an elimination counter that measures how many opponents were eliminated in a race by the player. This paved the way for the Eliminator mode introduced in Wipeout 3.
Wipeout 64 also introduced split-screen multiplayer for the first time, as well as a new addition called 'Challenge Mode'. Challenge mode is where the player has to complete sets of challenges in predefined classes and tracks to either get the fastest time in a time trial, the highest ranking in a race, or eliminate most of the opponents through a weapon-based 'deathmatch'.
Most of the tracks in Wipeout 64 feature duplicate circuit layouts of selected tracks in Wipeout and Wipeout XL, laid out in different locations. Some conversions are not perfectly accurate as some corners were completely smoothed or cut off, elevations were changed, and there were no split track sections.

As with all games in the series, Wipeout 64 was developed by Liverpudlian developer Psygnosis and published by Midway Games, marking the first and only time in the Wipeout series where one of the games was not published. by Psygnosis or SCE Studio Liverpool (its future name). The game is one of the few N64 titles to have notable load times, disguised by the "Please wait" request. Loading times between levels in Wipeout 64 last approximately a few seconds due to the need for sound decompression, according to Psygnosis in a later interview with IGN.2 Psygnosis used the Nintendo 64 analog wand to its advantage; making the D-Pad obsolete so that ships can respond quickly and more accurately in terms of improving older games.2 6

Despite the limited capacity of a game cartridge, Wipeout 64 managed to fit nine music tracks, mostly from composers Rob Lord and Mark Bandola (credited as "PC MUSIC" in the game), with additional tracks from Fluke and Propellerheads. Unlike its two predecessors, Psygnosis' in-house music team, CoLD SToRAGE, did not produce music for this game, although CoLD SToRAGE works appear in future Wipeout games.
The race announcers outperform Wipeouts and Wipeout 3 by having a male voice declare which weapons are about to be used against the player; a female voice welcomes the players to the courses and announces the events in the race and the result.
‹
›
Home
View web version