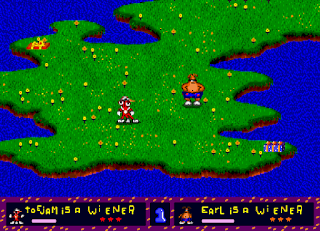 Genre: Action
Perspective: Bird's-eye view
Visual: 2D scrolling
Setting: Sci-fi / futuristic
Published by: SEGA Enterprises Ltd.
Developed by: Johnson-Voorsanger Productions
Released: 1991
Platform: SEGA Genesis / Mega Drive
The goal of the game is to recover the 10 pieces of the spaceship of our two protagonists, two aliens ToeJam and Earl whose spaceship crashed on Earth. The rooms of the ship are spread over about twenty levels, each level being a floor that is reached by taking the elevator from the previous level. If you fall from the edge of a level, you land on the corresponding place of the level below (with the risk of falling back on several levels if the place where you are supposed to land is empty). The size of the levels increases as the adventure progresses, and the “enemies” are more numerous and dangerous. In some levels there is a part of the ship, but not in all. In these levels are scattered gift packages with random effects and unknown at first glance, as well as food that can take away or restore life. The progression can be done in a linear or random way, it is a choice to be made at the beginning of the game, that is to say that the location of the pieces will be either always the same, or random.
In a game with one player, you can choose to play as either ToeJam or Earl, In a game with two players, the players can evolve on different levels, however, to reach a higher level, it will be necessary to wait for the other player In the elevator.
‹
›
Home
View web version